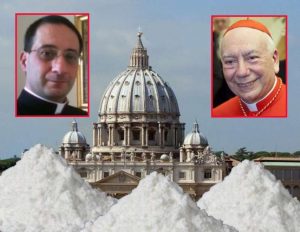 Cardinal Coccopalmerio, who is a key figure in this network of liberal perverts, is a member of the Congregation for the Doctrine since 2010, and is not only a staunch supporter and elector of Pope Francis, but was also a member of the secret and irregular Masonic Lodge known as “The Mafia of San Gallo” ( the St. Gallen Mafia), that has conspired for years behind the scenes, for the progressive and liberal take over of the Church, in a series of secret meetings, that took place in the town of San Gallo in Switzerland, headed by the late Jesuit Cardinal and Freemason, Carlo Maria Martini, described in detail in a biography by Jürgen Mettepenningen and Karim Schelkens, dedicated to the now retired Cardinal Godfried Danneels, who has been heavily criticized for trying to dissuade a victim of sexual abuse from denouncing his perpetrator, a Bishop who was the uncle of the victim, and for this reason during the 2013 Conclave in Belgium, there were those who wondered if he was eligible to even elect the new Pope.

Godfried Danneels admitted himself to be part of “The Mafia Club of San Gallo” in a public conference available on video:

Even the Italian press realized the importance of this book, and what the Cardinal defined as the “Mafia Club”, and decided to write about it in an article published in 2015, in one of Italy’s most popular newspapers, La Stampa: http://www.lastampa.it/2015/09/24/blogs/san-pietro-e-dintorni/francesco-elezione-preparata-da-anni-PAu2giegWwslaElPmNfC1L/pagina.html

So Bergoglio under pressure from what is known as “the San Gallo Mafia” which helped him to get elected in 2013, declined to renew Gerhard Ludwig Müller’s mandate, and conveniently replaced him with his deputy, Archbishop Luis Ladaria, 73, a Jesuit and Spanish theologian, and of course a member of the secret Swiss lodge of San Gallo, completing the liberal take over of the Faith, what is considered the most powerful insitution in the Catholic Church, The Congregation for the Doctrine of the Faith.