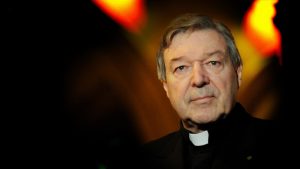 Pope Francis urged Cardinal George Pell to visit him today, September 29, 2020, the day he declined to see Mike Pompeo, the U.S. Secretary of State. The message is clear, Pope Francis and the Jesuits stand firm on the side of the pedophile Mafia because money and business deals are simply more important than the innocence of children for Bergoglio and his evil Jesuits.

After forcing Angelo Becciu, Cardinal Pell’s number one enemy to resign on Thursday evening, Pope Francis has welcomed his favorite pedophile back to the Vatican. On his arrival to Rome, Cardinal George Pell met with Juan Antonio Guerrero Alves S.J., who has been appointed prefect of the Vatican Secretariat for the Economy in January 2020.

As I have written on February 17, Pope Francis was desperate to have Pell back in Rome, “because of an internal problem within the Vatican bank.” In a nutshell, the Secretariat of State, the Vatican’s ultra-powerful coordinating agency has been involved in a huge scandal since last year, that only Pell seems able to solve, but of course, he wants his freedom back  and to be able to return to Rome in exchange.

The problem was triggered by the Holy See’s relationship with a disreputable Swiss bank that ended up in an internal dispute between the Secretariat of State and Vatican financial authorities. At the center of the conflict, was a multimillion-dollar line of credit used to fund a controversial investment in London property speculation.” (http://leozagami.com/2020/02/17/cardinal-pells-appeal-of-abuse-conviction-coming-up-as-the-vatican-wants-him-back/)

In the meantime, the Cardinal Emeritus of Hong Kong, Joseph Zen, 88, traveled to Rome to see Pope Francis but had his meeting canceled. Cardinal Zen, who is said to be very disappointed in the Pope, managed to deliver only a letter addressed to Francis through his secretary Father Gonzalo, and he waited three days in his hotel hoping for an invite, or at least a reply. In the end, in front of so much silence, he understood the papal hint, and left Rome. He wasn’t expecting such a humiliating treatment, but Pope Francis has no time to meet with people like him, or Pompeo, who criticize his unholy alliance with China, he would rather meet with convicted pedophile George Pell to sort out the Vatican finances instead.