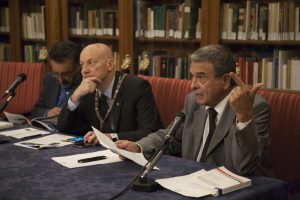 The Grand Orient of Italy’s Freemasons are praising Pope Francis’ covenant with Islam as “a turning point in civilization because it will open a new era” if applied. The “Catholic part” of the Abu Dhabi declaration was drawn up by the pope alone and “The Vatican Curia ‘did not put a pen’ in the drafting of the text,” claims Freemason and journalist Pierluigi Cascioli in the latest issue of Nuovo Hiram, the official journal of the main Masonic Obedience in Italy that conveniently leaves out the Jesuit touch to the declaration that was made to kickstart the upcoming One World Religion, a project created by certain branches of Freemasonry like the Grand Orient of Italy and the infamous Society of Jesus aka the Jesuits.

Pope Francis loves praying with Muslims at interfaith meetings, but so do the Freemasons of the Grand Orient of Italy who has always invited representatives of the Islamic communities in Italy to the Italian Masonic season that takes place at their headquarters. an unusual gesture made to promote their growing new alliance. Italian Freemasons unfortunately love and support the “Human Fraternity for World Peace and Common Co-existence” pact that was signed by the pontiff and the Grand Imam of al-Azhar Ahmed al-Tayeb. A  document that “ was exchanged several times between the two parties before it was signed,” writes the Masonic publication expressing their hope that the Catholic Church will “formalize this doctrine” in a magisterial text as it has formalized its “social doctrine” in magisterial statements.

The words above seem like a formal request from the Italian Freemasons to bring together a One World Religion. Pope Francis and Ahmed al-Tayeb ground the appeal to the human fraternity on “values which not only are fully compatible with each of their the specific faiths but which arise from their two distinct faiths,” says the Masonic reporter .“The appeal for greater fraternity is addressed to all humanity, even to the five billion people who don’t share one of their two faiths” as they fully share the values in the declaration based on the “lowest common denominator” of reason. “It is thus an appeal to everyone” he emphasizes.

Pierluigi Cascioli admits that even if “Pope Francis and the Grand Imam express avant-garde positions: How many of their followers will follow them? How far are the two leaders ahead of their respective ‘bases?’ Pope Francis is far from his base. The Grand Imam is very far from his.” However, “borrowing a term from the world of medicine so in vogue these days,”Cascioli views the Abu Dhabi Document as “a slow-release drug”for the future One World Religion that is fully endorsing the initiative: “Pope Francis and the Grand Imam have built an airport runway. A plane to ascend must give itself a strong impulse, with which it overcomes the force of gravity and takes off. Human beings (Catholics, or Sunnis, or the remaining 5 billion) should give themselves the ‘courage of fraternity,’ which is driven to take off towards a better world,”he writes.

Cascioli also notes that  even if the “equality”goals of the document face obstacles the declaration condemns “discrimination”and invites all to “mutual respect,”the Freemason questions however whether this includes “respect for women and men who have homosexual or bisexual tendencies.”  For Cascioli and the Grand Orient, every human being is “called to live eroticism according to one’s specific personal sensitivity. Every human being has the right (or rather, the duty) to live his eroticism according to his nature. According to nature, yes as nature has shaped it,”stresses the spokesperson of the Grand Orient of Italy, unfortunately, recognized by all U.S. Masonic bodies

My friend Jules Gomes at Church Militant wrote about the following situation citing the words of Pope Pius XI:  Throughout history, the Catholic Church, through its Magisterium, has condemned any attempt towards “unity” with other sects or religions. “Certainly, such attempts can nowise be approved by Catholics, founded as they are on that false opinion which considers all religions to be more or less good and praiseworthy,” Pope Pius XI declared in Mortalium Animos (1928), his encyclical against religious unity and the ecumenical movement.