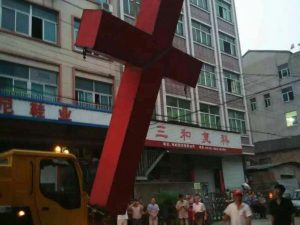 As the Chinese government propaganda claims progress containing the CCP virus pandemic, authorities have resumed their evil Anti-Christian actions to remove crosses from buildings all over China and continue the crackdown on Christian religious practices that started in 2018 when the Chinese authorities demolished a well-known Christian megachurch using dynamite.

Two weeks ago, a shocking new documentary on the state of Christian persecution in China was released, blasting the Vatican’s 2018 deal with the Communist government, saying it has created “double persecution” for faithful Catholics. Directed and produced by veteran filmmaker Elisabetta Valgiusti, the founder of Save the Monasteries, the hour-long documentary highlights the absolute control wielded by the Chinese Communist Party (CCP) over churches, despite government claims of religious liberty. The underlying problem of the agreement is that, in the end, bishops and priests become like state functionaries to an atheist regime that is persecuting all other Christian denominations.

The bishops of the Chinese Patriotic Catholic Association,an organization established in 1957 by the People’s Republic of China’s Religious Affairs Bureau to supervise mainland China’s Catholicswho were in many cases illicitly consecrated and under official ex-communication by the Catholic Church, were received into full communion with Rome as part of the Vatican’s agreement with China. In February 2020, China and the Vatican held their first-ever high-level meeting between their Foreign Ministers in 70 years. The full terms of the infamous China deal were not released to the public but have been reported to include the right of state authorities to propose and veto candidates for the episcopacy in China.  However, the latest round of blatantly Anti-Christian actions from the CCP, that have included the removal of crosses from buildings belonging to the state-run churches shows the evil side of this sick deal made with an Anti-Christian Satanic Pope.

According to a report from UCA News,  Catholic priests say they are cooperating in the removal of exterior crosses in hopes that entire church buildings will not be demolished or blown up.   According to a parishioner in the Chinese province of Anhui named John, Chinese officials cut down the cross from the top of Our Lady of the Rosary Church on April 18, 2020. Our Lady of the Rosary belongs to the Chinese Patriotic Catholic Association, the Catholic Church officially sanctioned by the Chinese Communist Party operating since 2018 in communion with Rome but still under rigid state control.

John, speaking to UCA News, explained that on April 13, the leaders of Our Lady of the Rosary, which does not have a member of the clergy assigned to it, and all religious activities are organized by the laity–asked the city authorities about making repairs to the church building. Three days later, the community director of the city requested keys and access to the church, in order to remove its cross.  Concerned parishioners went to Bishop Joseph Liu Xinhong of the Diocese of Anhui, who told them to request more information from the local CPCA office. The local CPCA office said they did not know of any plan to remove the cross from the building.

Xinhong was one of the bishops who had his ex-communication lifted and his position recognized by the Vatican following the 2018 provisional deal.  On April 17, the parish community leader said that he had been given “directions from superiors” regarding removing the cross. The following day, said John, the cross was removed by a “team of young people.”

Elsewhere in the province of Anhui on April 19, a cross was removed from a church in Suzhou City during pre-dawn hours, presumably to avoid the chance of a crowd protesting its removal. A man from the diocese named Paul told UCA News that the removal had previously been scheduled for the afternoon.

Paul said that police officers blocked people from entering the church and taking pictures of the removal and that a cell phone had been confiscated after it captured a picture of the cross coming down. In Hefei City, which is also located in the Anhui province, authorities on April 27 took a cross off a building for a Protestant church.

A priest from the Diocese of Anhui, identified only as “Father Chen,” told UCA News that these sorts of activities are “happening all over the mainland”and are not limited to one diocese or province.   “If the churches don’t unite to resist, many more crosses will be removed,” he said.

In September 2017, China enacted strict new regulations concerning religion and soon after, authorities strong of their new deal with the Jesuit Pope started their persecution on all not authorized forms of religion.  Churches that are not found to be in compliance are immediately destroyed.