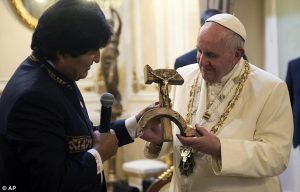 Good news, the Bolivian Socialist, President Evo Morales, who presented Pope Francis with the infamous ‘Communist crucifix’ and was strongly supported by the Vatican has finally resigned and is on the run after re-election marred by fraud allegations and corruption manipulated by the Vatican Jesuits. 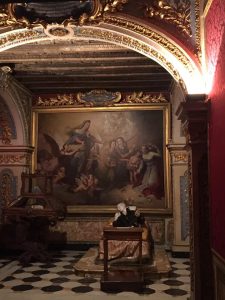 Earlier this year, Cardinal Toribio Ticona called on Catholics to support the indigenous leader stating: “Moving forward, we must always go with President Evo Morales, not only do we have to speak, but we must all work [in favor of him].”Ticona also said on the same occasion that “we must all work”and we must show we are Morales’ “happy supporters” to the rest of Bolivia.

However, the propaganda statement in favor of the Socialist leader of Bolivia  and head of the Movement for Socialism (MAS) Party created a lot of controversies and the Bolivian Bishops’ Conference was forced to issue an official statement saying that the public support that Cardinal Toribio Ticona had given to Morales was “personal”and didn’t represent the position of the Catholic Church. But we all know he was personally supported by Pope Francis.

In the last few hours, President Evo Morales, an anti-American Communist scumbag, fled the capital La Paz with the help of his Jesuit friends and resigned after the head of the Armed Forces, Gen. Williams Kaliman, suggested that he leave power in the wake of an October 20th presidential vote that electoral monitors said was marred by fraud. It was impossible to cover-up his criminal actions, even for the Vatican.

A few years ago, President Evo Morales gave Pope Francis an unusual and some say “provocative”gift during the pontiff’s visit to the country of Bolivia, a carving of Christ crucified on a wooden sickle and hammer. The sculpted juxtaposition of two of the world’s most potent symbols, Christianity and Communism, was made by none other than the late Jesuit priest Father Luis Espinal, who was murdered in the 80s for his support of the local Communist insurgents who took over the country after his death.

Jesuit Fr. Luis Espinal was returning from a movie in March 1980 when he was intercepted, tortured, and killed so he could become the ideal sacrificial lamb after altering the country’s political direction towards the left. His remains were found in a landfill. Paramilitaries were blamed for his death, but some say it was the same Jesuits who ordered his death that could help establish a long-lasting Communist dictatorship masked as democracy, and the plan worked out perfectly.

Outrage ensued, with an estimated 70,000 Bolivians attending his burial in La Paz. Three years earlier, in 1977, Fr. Espinal’s struggle included an epic hunger strike made to protest the military government that inspired thousands of others to follow suit. National elections soon followed and the leftist take over of the country strongly supported by the cocaine producers who also launder their money through the Vatican Bank, was assured until the arrival of the 1997 elections of P2 lodge member General Hugo Banzer, leader of the Nationalist Democratic Action party (ADN) and former dictator (1971–78), who  launched until his death in 2001, a policy of using special police-units to physically eradicate illegal coca of the Chapare region. Excluding Italy there were still functioning branches of the P2 until the 90s all over South America in Argentina, Venezuela, Paraguay, Bolivia, France, Portugal, and Nicaragua. The central common interest of all these elements has always been hatred and fear of Communism.

But in 2005, the coca-advocate and native peasant-leader Evo Morales, took over the country to transform it in another Communist shithole, courtesy of the Jesuits, who now fear for his life and are protecting him, as many Masonic lodges in Bolivia no longer in the hands of the Jesuits and progressive Freemasonry have allegedly been ordered to find him and have him executed on the spot.

His latest move confirms once more the validity of the article above. 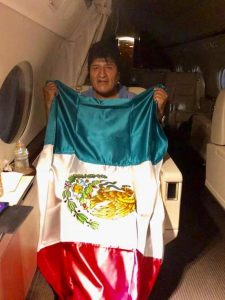 Jesuit agent Evo Morales on a private plane to Mexico