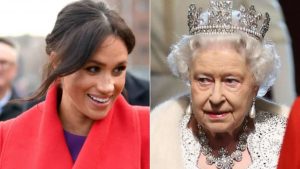 Queen Elisabeth II is reportedly not impressed with the way Prince Harry and Meghan Markle have been acting since marrying in 2018, and several sources have claimed the Queen is “disappointed” with their behavior as representatives of the British monarchy. The most recent blow came after Meghan skipped visiting the Queen’s Scottish residence Balmoral over the summer, which has always been considered very important in the lives of the Royal family.

Perhaps it’s Meghan Markle’s Communist values that have sparked concern, as she attended a liberal Catholic school from 7th to 12th grade which forged her demented left-wing ideology now embraced by Prince Harry as pointed out in a previous article.

Setting aside the fact that she is a relative and I often dislike her political and religious views and choices, I have a certain degree of sympathy towards her in regards to the maintenance of family traditions as they are essential for the British monarchy and often remind me of my mother’s fixation with family reunions and other private matters.

Today the elite from around the world arrived in Rome for the nuptials of fashion designer Misha Nonoo and her American entrepreneur fiancé Michael Hess, and, of course, Meghan and Harry had to join this pathetic show of superficial materialism. The wedding kicks off with an intimate gala lunch on Friday inside Rome’s Cinecitta film studios where much of Federico Fellini’s 1950s film La Dolce Vitawas shot. However, things have changed in Rome, no better in appearance than San Francisco or L.A. since the left-wing idiots have taken over, and this once beautiful city is now overrun with rats, homeless people, and illegal immigrants.