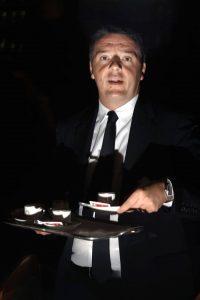 On Sunday, the Carbonari (Italian for “charcoal makers”) an informal network of secret revolutionary societies active in Italy from about 1800 to 1831 has reactivated their Grand Lodge called Alta Vendita with the support of many masonic factions fed up with the current situation and loss of sovereignty in Italy. Their chief purpose is to defeat tyranny and establish a constitutional government, and in this new reawakening some inside sources say their final aim is to march on Rome and take power in 2022 after defeating their longstanding enemies, the Vatican.

Matteo Renzi knows the Carbonari are notorious for organizing plots and assasination against oppressors, therefore the ex-premier and former Democratic Party (PD) leader announced earlier today that he was quitting the center-left group. He explained his decision to La Repubblica, stating that the party had become nothing more than a collective of different factions and bemoaned a lack of strategic vision.

He also said he wanted to concentrate on combating Matteo Salvini, the leader of the right-wing League party, rather than fending off “friendly fire” but the truth is, that Illuminati Academy member Matteo Renzi, who is a scumbag in the hands of the Jesuits, has been working on this plan for a while knowing that detaching from the new alliance between the Italian Democrats and the 5 Star Movement is his only opportunity to survive persecution in the years to come.

About 30 lawmakers are expected to join Renzi’s infamous breakaway group. He said the symbol of the new party would be presented at his annual Leopolda conference in Florence. He also said leaving the PD would be better for all involved, and secretly he has already received an endorsement from P2 member Silvio Berlusconi for his choice. However, sources say that Renzi phoned Premier Giuseppe Conte on Monday to tell him that he and his loyalists would continue to support the coalition government with the 5-Star Movement (M5S).

The Carbonari were a secret society originally active in Italy from about 1800 to 1831 and divided into small covert cells scattered across the country. Although agendas varied, evidence suggests that despite regional variations most of the members agreed upon the creation of a liberal, unified Italy that would never bow down to foreign oppressors like France, Germany, Austria or England. Times have changed but the new Carbonari might be Italy’s solution against the oppressive regime of Bruxelles technocracy.