“You are the passengers on a most uncommon elevator about to ascend into your very own episode of…The Twilight Zone.” ―Rod Serling

On the way to his Sunday Angelus, Pope Francis got stuck in a Vatican elevator for 25 minutes, and had to be rescued by firefighters. In the end, the pontiff apologized to the faithful gathered in St Peter’s Square for showing up seven minutes late to his traditional noon appointment, but this episode will be judged by many as a sign of the end times. 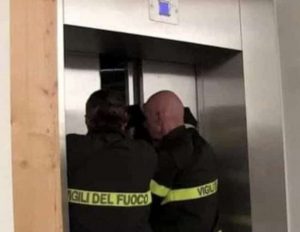 In the 1987 Faustian horror film “Angel Heart,” adapted from William Hjortsberg’s novel Fallen Angel, the film director Alan Parker unravels a sinister mystery of one man’s personal journey to hell. Elevators, staircases, fans, the eating of eggs, the growth of fingernails, keys, and other certain props are common everyday objects that can be utilized as ominous signs, but it is the elevator that is seen as particularly sinister, especially during the end credits, when the protagonist, interpreted by Mickey Rourke, is seen standing inside an elevator which is interminably descending, presumably to hell. “The Elevator” is also the first segment of the sixteenth episode from the first season (1985–86) of the television series The Twilight Zone, and an elevator is also the protagonist to the fictional episode that is the premise of the theme park attraction The Twilight Zone Tower of Terror at Disney’s Hollywood Studios in Lake Buena Vista, Florida that inspired the television film, “Tower of Terror” from 1997, directed by D.J. MacHale.

In the movie, the “Devil” from 2010, a man jumps from the thirty-fifth floor of a skyscraper, and an elevator within the building gets stuck shortly thereafter with a group of people linked to the suicidal man. Soon afterward, a mysterious note is found, where he writes of the devil’s approaching presence. “Devil” a American horror film, is based on a story by M. Night Shyamalan, originally written as a “nod to Agatha Christie’s” mystery novel. The film’s director, John Erick Dowdle, changed the original story by adding something he called a “Devil’s Meeting,” which he claims is based on a legend of the Devil coming to earth to “test evildoers by tormenting them.”

Well, it looks like the Jesuit Pope was stopped for a reason on his way towards his Sunday encounter with the Faithful. The 82-year-old pontiff said he had been trapped in the lift for 25 minutes because of a power outage before he was freed by firefighters.

“I have to apologize for being late,” said the smiling Pope at this unusual start of the Angelus address. He then asked the crowd for a round of applause to the firefighters. Addressing the crowd, the Pope said there had been a “drop in voltage and the elevator stopped,” Pope Francis then said: “Thank goodness, the firefighters arrived, and I thank them so much, and after 25 minutes of work they managed to get it started again.”

Hey Francis, you got lucky this time,  there won’t be firefighters to save you on the other side as you descend into hell, where you belong.

Vatican media caught by surprise as drama unfolds behind the scenes