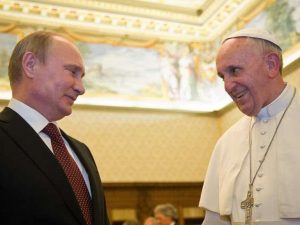 Russian President Vladimir Putin arrived in Rome on the 4th of July 2019 for a one-day visit to the Italian capital. His first appointment was at the Vatican where he visited Pope Francis. Later in the day, he saw President Sergio Mattarella at the presidential palace and in the late afternoon Premier Giuseppe Conte at the Premier’s office.

Of course, Italy is in favor of lifting Western sanctions against Russia, imposed for its intervention in Crimea and eastern Ukraine when Obama was president. In an interview with Corriere della Sera, Putin spoke of “tried and tested” ties with Italy and said he was ready to restart dialogue on a broad strategic agenda with the United States, but the truth is that Vladimir Putin is pushing anti-Trump agenda along with Pope Francis and the Jesuits thanks to their long historic links with Russia.

The evening began at Villa Madama with deputy Premiers Luigi Di Maio and Matteo Salvini, who is also very close to Russia. Salvini, who has outstripped pro-Soros Di Maio in recent polls with his anti-migrant and other hardline stances, has frequently voiced admiration for Putin, and has advocated dropping Western sanctions, and for this reason some suspect Salvini might have received secret financing from Russia in the past, something that worries U.S. Intelligence agencies that are busy investigating this matter.

Finally, Putin will have a private meeting with Silvio Berlusconi, an old friend and mutual admirer, but, of course, his most important visit was with Pope Francis, the real leader of the New World Order. Putin was accompanied by Foreign Minister Serghei Lavrov, as well as the trade, energy, culture, and health ministers. Putin arrived in the Vatican for an audience with Pope Francis, his third, shortly after two o’clock local – over an hour behind schedule, but the Pope was still very happy to meet him. Security in Rome was heightened due to the Russian Premier’s arrival as he traveled through the city in his six-meter-long fully armoured Aurus Senat limousine.

One of the hot topics in discussion at the Vatican today was not only the ongoing UFO disclosure, promoted by various Communist agents of Russia like John Podesta or the Clinton’s, but also the growing threat of Donald J. Trump to the Vatican Jesuit lead New World Order that Putin secretly supports even if he likes to send a different image to the outside world. It was not a coincidence that Vladimir Putin and Bergoglio met today on Independence Day and people need to wake up to the real Russia Collusion represented by Jesuit Pope and his old Communist buddies intent on  destroying the Catholic Faith and promoting Socialism. Remember  back in the days the KGB made corrupting the Church a priority.