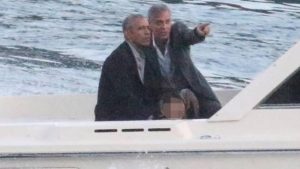 This weekend Italy is aiding former president Barack Obama and many U.S. and European conspirators that are meeting this weekend at George Clooney’s villa to engage in an act of treason against the United States of America and our president Donald J. Trump.

Italy is not only supporting the corrupt media, but they have implemented a massive security operation that uses Italian police and Italian armed forces to protect globalist scumbags using money from Italian taxpayers.

The Italian media just announced that George Clooney may run for President of the United States.

This is a video of the arrival of traitor Barack Obama in lake Como published today by Italy’s top left-wing newspaper La Repubblica.