Last April I wrote, “Mark my words the guy next to me in this photo, fellow Trumpian and friend, Professor Antonio Maria Rinaldi, will be one of the leaders of the new European Parliament with the Northern League at the end of May after the upcoming elections.” 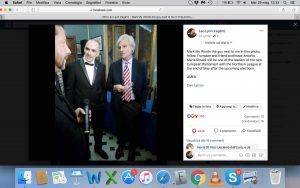 Antonio Maria Rinaldi, a distinguished member of Italians4Trump/Trumpiani d’Italia was just elected to the EU parliament with 42.728 votes, making him the third most voted candidate in Matteo Salvini’s party.

Salvini said that the victory of his League party on Sunday would change the rules of the EU,  and the famous economist Antonio Maria Rinaldi will play a significant role in it, just as I predicted a little over a month ago, in April 2019.

To celebrate this incredible victory over the forces of evil in Europe, the official handmade in Venice golden spumanti bottle presented by Professor Antonio Maria Rinaldi and the Italian4Trump to the media on the 20th of January 2017 for the Italian inauguration party for  Donald J.Trump, an event that took place in the exclusive set up of Palazzo Ferrajoli in Rome, will be officially donated by the Italians4Trump/Trumpiani d’Italia team, to our number one patriot and Infowars creator, Alex Jones, to celebrate Independence Day.

I will be at the Infowars studio on July 4th, 2019 in Austin, Texas to personally give this gift to Alex and the Infowars crew to thank them for their astonishing work in fighting the censorship and lies of mainstream media. I am hoping we can save not only the U.S. but also Europe, from the Socialist/Technocratic nightmare imposed by the Bilderberg Club and their Jesuit friends, who are meeting in Montreux, Switzerland, tomorrow.

The 67th Bilderberg Meeting will take place from 30 May – 2 June 2019, where the ex-Italian Prime Minister and Jesuit agent Matteo Renzi will participate, who happens to be Matteo Salvini’s number one enemy. Renzi still hopes to succeed Salvini once he is forced out of power by the Bilderberg Club and the Vatican, who are plotting every day against the League.

It was Renzi from the Italian Democratic Party who had me arrested and persecuted in Italy for my political activities, and he remains a very dangerous individual, whose best friend is none other than Emmanuel Macron. Both are Vatican agents who have a lot of interest in the upcoming Bilderberg Meeting.

We hope, however, that people like Antonio Maria Rinaldi, a member of Italians4Trump, and a dear friend and close collaborator, will make a real difference for Europe. “May the Force be with you, Rinaldi!”