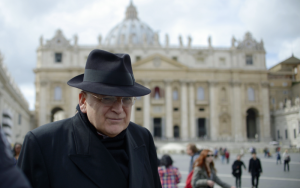 U.S. Cardinal Raymond Leo Burke, who is said to be close to president Donald J. Trump, is definitely my favorite Cardinal at the moment. Especially so, when a few days ago, he shocked the world by openly opposing the insane policies of left-wing mondialist Pope Francis, in regards to Islamic immigration.

Burke is a known critic of Pope Francis, advised the governments of the West to limit the number of Muslims allowed to immigrate to traditionally Christian nations. “To resist large-scale Muslim immigration in my judgment is to be responsible,” Cardinal Burke said, responding to a written question made during a pro-life and pro-family conference in Rome May 17, 2019, adding that Islam “believes itself to be destined to rule the world.”

Finally, a Catholic Cardinal tells the truth. “You don’t have to be a rocket scientist to see what has happened in Europe,” said Cardinal Burke, indicating the large Muslim immigrant populations in France, Germany, and Italy.

Cardinal Burke ended this bold statement by saying that while the church must be generous to “Individuals that are not able to find a way of living in their own country,” this is not the case for many Muslim migrants, “who are opportunists.” The political and religious opportunism of Islamic groups is on the increase and we need to reflect on the words of Cardinal Burke before the United States becomes another Islamic stronghold like the EU and Great Britain, that are quickly losing their Christian identity in favor of Chrislam and the One World Religion crafted by the Jesuit Order and the Illuminati.