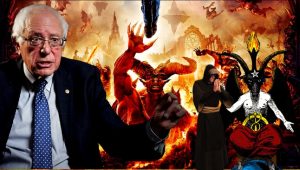 The increase in Satanic membership and the many moral failings of the Democratic Party in the United States demonstrate this hypothesis every day. Apparently, the Satanic Temple attracted thousands of new members in the first 36 hours after the election of Donald J. Trump and the Satanic organization reported that, “The 4-year-old temple, which had a pre-Trump membership of around 50,000, has never before seen a spike in registration nearly this big.”

In the meantime, demonic possession is increasing and Catholic priests are being recruited in record numbers to battle actual demons who have seized control of human minds and bodies as I outlined in my new book, Confessions of an Illuminati Vol. 6.66.

The mistake people make today is thinking that democrats are merely human beings with different political views. In truth, they no longer possess human consciousness, they are possessed by demonic forces that seek the total destruction of life, liberty, and humanity. This is why they are obsessed with abortion, murder, economic destruction, media lies, and the complete obliteration of the family consisting of a man and a woman who can reproduce to perpetuate the human species.