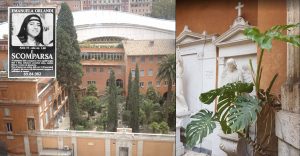 This story is vaguely reminiscent of Dan Brown’s Angels & Demons, where it leads to an ancient tomb in the Teutonic cemetery inside the Vatican walls, linked to the possible death of Emanuela Orlandi, the Vatican citizen who mysteriously disappeared on the 22nd of June, 1983, never to be seen again.

Finally, after the unsuccessful findings of last year, when human remains (still not identified) surfaced at the Apostolic Nunciature to Italy, some credible reports were received months ago by the lawyer of Emanuela’s family, that indicate that she could actually be in the Teutonic Cemetery, a burial site adjacent to St. Peter’s Basilica in Vatican City. This place is located where the Circus of Nero once stood during the period of the Roman Empire, and was the site of martyrdom for many  early Christians of the city.  Martyrdom in the early Christian era, represents to some extent, a direct extension of Roman death and purification rituals. Dying for a specific – and usually honorable – purpose, in the honor-shame society of the Roman Empire led to a new culture, religion, and of course, Imperial dynamic, that the Vatican seems to still want to reflect in some way by possibly placing the body of Emanuela there, hidden away to guarantee the very survival of the Church.

Remember that the Vatican inherited all the traditions of Ancient Rome.  The term Vatican was used in ancient times to simply identify the marshy area of Rome located on the right bank of the Tiber River, between the Milvio Bridge and the present Sixtus Bridge. In the Imperial Age, from the 2nd century A.D., the toponym Vaticanum was applied to an area corresponding roughly to the present Vatican City State.

The late Father Gabriele Amorth, who was the Vatican’s chief exorcist and one of the protagonists of my latest book Confessions of an Illuminati vol.6.66, said that he heard that Emanuela Orlandi was murdered and her body disposed of after she was forced to take part in sex parties in the Vatican. The late Amorth told La Stampa newspaper: “This was a crime with a sexual motive. Parties were organized, with a Vatican gendarme acting as the ‘recruiter’ of the girls.”

Adding, “The network involved diplomatic personnel from a foreign embassy to the Holy See. I believe Emanuela ended up a victim of this circle.”

The cemetery is the oldest German establishment in Rome, so the foreign embassy mentioned by Amorth could well be the German Embassy in Rome. However, the debate over who kidnapped Emanuela and what became of her has enraged many in Italy for a very long time. The family has now presented a formal request to the Secretary of State of His Holiness The Pope, Cardinal Pietro Parolin to assert the history of this mysterious loculus where Emanuela is said to be placed behind the statue of an angel, and – if the results are not certain – to obtain the re-opening of it. The location looks as follows: leaning against a wall of the cemetery is a rather modern looking statue of an angel holding a sheet with the Latin writing Requiescat in pace, meaning, “Rest in peace.” On the floor, a slab with a funeral inscription dedicated to Gustav Adolf, Cardinal Prince of Hohenlohe-Schillingfürst, (1823–1896) a member of the Hohenlohe family of Germany, claiming descent from Eberhard, one of the early dukes of Franconia who became a Cardinal of the Catholic Church and one of the famous people of ecclesiastical, artistic, political, or diplomatic backgrounds, buried in this very exclusive cemetery.

Last summer, a letter with the photo of the tomb in question attached, was sent to Laura Sgrò, the lawyer who assists the Orlandi family: “Look for where the angel indicates.”

At that point, defensive investigations were carried out by checking the state of the places, and it was discovered that the tomb was opened at least once, and that the dating of the statue is different from that of the slab. But it was above all “verified that some people had been informed of the possibility that the remains of Emanuela Orlandi had been hidden in the Teutonic cemetery”, as the lawyer herself explains.