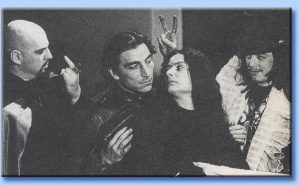 On the left Anton LaVey and on the right Bobby Beausoleil…

A California parole panel made of liberal idiots, has just recommended for the first time, that Charles Manson follower Robert Beausoleil, better-known in the outside world as Bobby Beausoleil be freed after serving nearly a half-century in prison for murder.

Satanist Bobby Beausoleil, now 71, was not involved in the most notorious killings of actress Sharon Tate and six others by the Manson “family” in 1969. but he was, however, convicted in the slaying of musician Gary Hinman that occurred the same year. Hinman was tortured inhumanly for three days, by Mansons’ Satanic cult, and Manson even cut Hinman’s face with a sword before Beausoleil violently killed him, according to testimony made at previous parole hearings.

Future Manson Family murderer Bobby Beausoleil met Charles Mason after co-starring with Anton LaVey, the founder of the Church of Satan, in Kenneth Anger’s original version of “Lucifer Rising,” filmed in 1968, that later became the 11-minute short film, “Invocation Of  My Demon Brother,” directed, edited, and photographed by avant-garde film director and member of the Ordo Templi Orientis, Kenneth Anger (IX° degree), featuring the rather unusual soundtrack made by an LSD driven Mick Jagger,who played a Moog synthesizer.

There are, of course, numerous occult theories as to what really happened regarding the earlier version of “Lucifer Rising” that was never released in its entirety. A legend in occult circles that still circulates today, is that Kenneth Anger, who was with Beausoleil, placed a terrible curse upon him for fleeing Lucifer, Bobby Beausoleil had escaped with the original footage of the film. This curse apparently caused Bobby’s car to break down near the infamous desert commune of Manson’s cult, at  Spahn Ranch, also known as the Spahn Movie Ranch, based in Los Angeles County, California.

Occult expert and Satanist author Gavin Baddeley, wrote that Charles Mason, who died last year, welcomed Beausoleil and buried the stolen footage of “Lucifer Rising” in the desert, demanding a ransom of ten thousand dollars from Anger for its return. The money was never given and Anger decided  to release the few minutes he still had left in his archives in 1969 as “Invocation of My Demon Brother.” Anger, is still alive, and said that this short film was assembled from scraps of the first version of Lucifer Rising, but he never truly explained what happened due to the infamous connection with the Manson Family.

Anger and Beausoleil later made up, and Beausoleil and his fellow inmates at Oregon State Penitentiary in Salem, Oregon later composed the soundtrack for Anger’s 1972 film “Lucifer Rising,” directed by avant-garde film director and member of the Ordo Templi Orientis, Kenneth Anger (IX° degree). The music of “Lucifer Rising” is closely linked to the occult elements and Crowleyanity found in Anger’s film. Beausoleil sought to draw on his own occult life experiences to tell the story of “mythical Lucifer awakening in his pit of despair, rekindling his torch, and rising like a phoenix from the ashes of his own unmaking to begin his long journey from the dark recesses of the underworld — shedding his pride along the way in his uncompromising desire to regain the Beloved.”

Beausoleil sought to do this by creating dark and sinister sounding music.

Parole panels ruled against releasing Beausoleil 18 prior times. California’s incoming governor, Gavin Newsom, could block the parole in coming months. Termed-out Governor Jerry Brown has consistently stopped releases for followers of the cult leader, who died in prison in 2017.

Gary Hinman’s cousin, Kay Hinman Martley, who attended the hearing, said Beausoleil was already lucky once, when his death sentence in 1970 was reduced to life in prison by an appeals court in 1973.

“I constantly have hope that they’ll do the right thing and keep these people in prison, and now my hopes have to go with the governor,”she said, adding she plans to reach out to Newsom to tell him “this man does not belong outside the walls of prison.”

Beausoleil’s attorney, Jason Campbell, said his client is no longer dangerous and that his release “is long overdue.” Sharon Tate’s sister, Debra Tate, who also attended the hearing, said she will mount a social media petition so parole opponents can “make their feelings known to Governor-elect Newsom, because he has a tendency to be very liberal. ”

Adding ” Without public opinion weighing in on this, there is no hope.”

She rightly objected that Beausoleil keeps breaking prison rules by profiting from selling his art and music outside of prison.  Lady Gaga recently used the soundtrack from “Lucifer Rising” for her Netflix documentary. Let’s hope liberal California does not free this criminal and treat him as a rock star. Newsom who was baptized and brought up in the Roman Catholic faith  describes himself as an “Irish Catholic rebel […]”  and is a leftist scumbag.