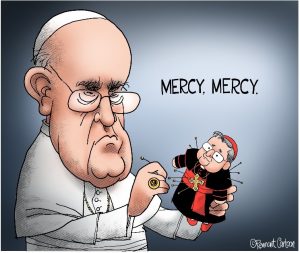 Rome, December 12, 2018 – A sudden emergency announcement was made earlier today by Vatican spokesmen Greg Burke, after a Melbourne court convicted the now former Vatican finance chief, Cardinal George Pell, of sexually abusing two choir boys in the 1990s when he was Archbishop of Melbourne. After more than three days of deliberations, the court handed down a guilty verdict Tuesday by a unanimous consent of the jury. If the verdict is confirmed, it will be the highest-ranking condemnation of a Church official for a crime of sexual abuse.

Pope Francis had to frantically reorganize the group of cardinals advising him on how to reform the Vatican bureaucracy, conveniently  removing  Cardinal George Pell and another prelate under scrutiny for sexual abuse and cover-up, and a third who has now retired. Vatican spokesman Greg Burke announced the move today in a special briefing, saying that  Francis wrote to the three prelates individually in October, “thanking them for the work they have done over these past five years.” The three removals leave the Council of Cardinals with six members. Burke said the naming of replacement members “is not foreseen at this moment.”

Pell took a leave from his role as the head of the Vatican’s Secretariat for the Economy in June 2017, after Australian police announced they would be pursuing charges against him for historic sexual abuse of minors. Asked about the status of Pell’s Vatican job at the briefing, Burke responded:

” The Holy See has the utmost respect for Australian judicial authorities. We are aware that there is a suppression order in place by the court and we respect that order.”

Of course, Pell strenuously denies the allegations made against him. Most of the specifics of the accusations are still unknown, as the trial has been kept under strict secrecy after a judge conveniently placed a gag order on all press coverage. The order, which still remains in place, was reportedly granted to “prevent a real and substantial risk of prejudice to the proper administration of justice.” Now, however, several Australian media outlets have reported that Pell has been found guilty of all charges and the Vatican pedophile lobby is moving fast to avoid being exposed.