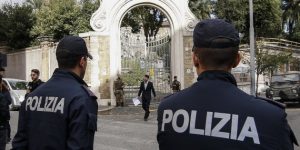 Police officers stand front the entrance of the Apostolic Nunciature in via Po in Rome, 31 October 2018. PHOTO ANSA/FABIO FRUSTACI

A new inspection by the Italian Police and the Roman Forensic Science Police Unit took place this morning in Villa Giorgina, home of the Apostolic Nunciature, which is considered the Vatican embassy in Rome, unearthing more bones in this increasingly horrific scenario on Vatican extraterritorial soil.

According to the Italian media, other fragments of bones surfaced during the new excavations, including part of a skull and jaw, that could be useful in the identification process, but may also belong to another victim. The latest police investigation, that took place earlier today, was carried out in agreement with Giuseppe Pignatone, Rome’s chief prosecutor, and the Vatican authorities.

The Criminal Science Unit consisting of Vatican expert Giovanni Arcudi, director of Forensic Medicine at the University of Tor Vergata and Enza Livieri, a medical officer from the Italian Police, finally began to examine the bones, and at the moment it is not yet possible to establish with absolute certainty the sex or age of the remains, so we will have to wait another week for the DNA results as the investigators told the press yesterday they needed to isolate the bones before proceeding.

As breaking Pedophilia scandals explode within the Catholic Church, and the world awaits the DNA results of the bones, the Pope is busy supporting Soros’ extreme left-wing immigration agenda, stating last week that nations do not build themselves, “they are built by migrants, just as migrants built Europe.”

The pope is rewriting-history by making this false statement, as Europe was built to defend Christianity from the Muslim enemy for centuries with wars and constant confrontations. “Europe was not just born like that,”the pope told the delegation of Scalabrini missionaries in spontaneous remarks made in the Vatican the day the mysterious bones were discovered.

“Europe was made by many waves of migrants over the centuries”said Pope Francis, who even used the example of  “the caravan traveling from Honduras to the United States,”attacking in the process the sovereignty of the United States and the president, who he once accused of being “not Christian.”

Remember, George Soros might be the sponsor of chaos with companies like Mastercard backing him, but the ultimate controller of the Satanic New World Order is Pope Francis, and our only hope to fight him and Soros is President Trump and the Red Wave!