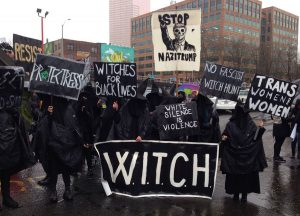 Since 2017, a detailed document explaining how to cast a spell that would bind Trump to all who abet him has been circulating the web in both private and public witchcraft groups, and even those who don’t regularly practice were invited to use magic to stop  President Trump. The Illuminati network of secret societies sponsored by George Soros have been organizing marches, petitions, and demonstrations against Donald Trump in fear of reprisal for their dark activities that include human trafficking, sexual slavery, and pedophilia.

Orders and groups like the Ordo Templi Orientis and the Temple of Set, created by liberal California and corrupt and manipulative Freemasons like Michael M. Hughes, have been leading the movement. Hughes is a Freemason and a member of The Societas Rosicruciana in Civitatibus Foederatis, officially a Christian Rosicrucian organization, unfortunately, infiltrated and controlled by Satanist these days.

A large group of witches is meeting in Brooklyn this month to place a curse on Judge Brett Kavanaugh “and upon all rapists and the patriarchy which emboldens, rewards and protects them.” In the meantime, the disinfo agents of the system, like Gary Lachman, are accusing Trump himself of using the Occult. The author, a founding member of the rock band Blondie, published a book last May entitled,  “Dark Star Rising: Magick and Power in the Age of Trump.”

However, the truth is now in front of everyone. The darkest side of the Occult is openly working against Trump with the Illuminati witches that are “embracing witchcraft’s true roots as the magik of the poor, the downtrodden and disenfranchised.”This is what  the website states that is advertising the October 20, 2018 event, “as often the only weapon, the only means of exacting justice available to those of us who have been wronged by men just like him.”

Incredibly enough 1,000 people have said they will attend this demented sold-out event, which will also be live-streamed on social media for all the liberal witches and the Illuminati sorcerers that control these Satanic idiots. A quarter of the proceeds will be donated to abortion giant Planned Parenthood, organizers stated. Satanists have, in fact, emerged in recent years as strong advocates of Planned Parenthood. This happened for example in Missouri a year ago, where The Satanic Temple openly intervened in support of Planned Parenthood. Definitely an unexpected advocate in what some consider to be restrictive abortion laws.

Dakota Bracciale, a “queer, non-binary witch” living in Brooklyn, who is spearheading the event, told the Huff Post that witches use hexes as a radical act of resistance against oppressors. “Witchcraft has been used throughout history as a tool and ally for people on the fringes of society who will not ever really get justice through the powers that be,”Ms. Bracciale said. “So they have to exact their own justice.”

Bracciale claimed that Brett Kavanaugh’s confirmation was proof that survivors of sexual assault often do not get justice by going through the courts, but witchcraft can offer the means of “exacting justice that would otherwise be denied to you.”

Hexes are “not something you do lightly,” Bracciale said, “but it is something you have in your arsenal or toolbox.” Bracciale distinguished a hex from a “binding”spell, which prevents someone from doing something and limits his ability to act. A hex, she said, is a more direct attack that engages its target in a supernatural fist fight, something that shows how the dark side of the Illuminati wants to actively engage in Black Magic to stop Trump and Kavanaugh.

Remember, Black magic traditionally refers to the use of supernatural powers or magic for evil and selfish purposes and this is definitely a selfish purpose inspired by malevolent and Satanic minds who have decided to sabotage democracy and destroy the sovereignty of the USA. Ultimately, they will fail, because the will of the people is not on their side and positive forces will drive culture forward, both visibly and behind the scenes, against these shameless and cowardly acts set up by the dark side of the Illuminati and their secret societies.