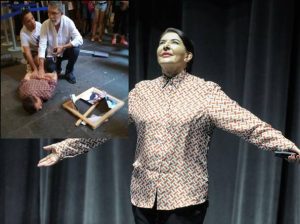 Two days ago, Occult High Priestess Marina Abramović was violently attacked in Italy by Vaclav Pisvejc, a self-styled artist in front of Palazzo Strozzi in the city of Florence after the presentation of her book “Marina Abramović Interviews 1976-2018” containing 40 years of interviews with the artist. Abramović was leaving the Florentine museum where an anthological exhibition of her work was also being displayed, when the attacker broke a canvas on her head! The canvas depicted a portrait of Marina Abramović, made by the aggressor.

This is a video of the event from La Repubblica: https://www.youtube.com/watch?v=ZLgemdyuT6E

“We’re fine! Everything is fine!” Arturo Galansino, director of the Palazzo Strozzi Foundation published this comment along with a photo in which he embraces Marina Abramović. This was possibly an attempt made by the curator of the exhibition “Marina Abramović. The Cleaner “, to downplay the aggression suffered by the controversial Serbian artist in the museum courtyard.  Vaclav Pisvejc remained silent when Abramovic asked him why he did it, then replied,“I did it for my art”.

Pisvejc is of Czech origin and a long-time resident in Florence, a self-styled artist and agent provocateur of the art scene. Pisvejc has already risen to the forefront of the news for similar episodes when last January in Piazza della Signoria, he smeared a statue by the artist Urs Fischercon, with red paint, later stating he was the real Urs Fischercon. Performance art counterculture or insanity, on that occasion he was caught by two officers of the Municipal Police and reported for damage and defacement.   Dario Nardella, the Mayor of Florence, stated to the Italian Democratic Party, “A man, not new to this kind of gesture, has struck Marina Abramović in the head with a canvas, and luckily he was not armed and the man was stopped, total solidarity to Marina!”

I have talked extensively of the importance of Florence in Occulture and Satanism in my books, and the presence of Marina Abramovic is definitely triggering dark and unpredictable forces. The Satanic artist seemed genuinely shocked after the event, but told everyone later, “I want to act like the Dalai Lama and forgive him.” But remember, Marina Abramovic is no saint, and her art is actually Magick with a “K”. The spelling became popular when used by Aleister Crowley in the 1900s, who wanted  to differentiate the slight of hand trick magic, with his own deviant form related to Satanism.

One thought to “Marina Abramovic violently attacked in Florence”