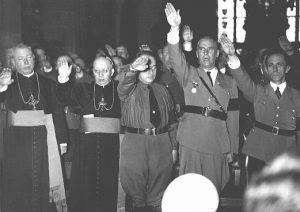 2018 was Annus horribilis, a horrible year in Latin,for the Chilean Catholic Church that has been involved in a series of pedophilia scandals. Chilean authorities announced in July that they are investigating 158 members of the country’s embattled Catholic Church and the Pope just accepted the resignation of two more Chilean bishops after the entire Episcopal Conference turned in their resignations back in May following the outbreak of the sexual abuse scandals. Francis has already accepted the resignations of five of these bishops in June, and now the resignation of two more bishops and the disputed nomination of two apostolic administrators generates further panic in the Catholic Church in Chile. Basically, of the 27 ecclesiastical jurisdictions in this South American country, eight are in a vacant seat situation: San Felipe, Valparaíso, Rancagua, Talca, Chillán, Valdivia, Osorno, and Puerto Montt.

At the same time, a German court delegation was in Chile in April to learn more about the ongoing investigation into Colonia Dignidad, a notorious Nazi pedophile sect founded by German immigrants in the 1960s,later renamed Villa Baviera—located in the south of Chile, about 340 km south of Santiago, where many cases of sexual abuse against minors took place. The German courts that sent their representatives last April are mulling an appeal filed by Dr. Hartmut Hopp, a central figure in the scandal, who fled Chile in 2011, after being convicted of complicity in 16 cases of child abuse.

So what are the connections between Colonia Dignidad and the Catholic Church? Well, Colonia Dignidadwas initially established as an immigrant community by a group of Germans after World War II to celebrate German language and culture, but was quickly taken over by Paul Schäfer Schneider (1921-2010), a former Nazi, in 1961, shortly after he arrived in Chile. This was thanks to the Ratlines, a system of escape routes for Nazis and other Fascists fleeing Europe at the end of World War II that saw the direct involvement of the Vatican. The origins of the first ratlines are, in fact, connected to various developments in Vatican-Argentine relations before and during World War II.

The Chilean Catholic Church is desperately trying to hide the more sinister side of their pedophile network and, of course, its Nazi connections, but the whole Church seems to be falling apart. Let’s hope we can witness further developments.

It does not seem like a coincidence that a scandal involving the sexual abuse of minors by clergy of the Catholic Church in Chile coincides with Germany declassifying its files on Colonia Dignidad, a sect in Chile run by a Nazi pedophile serving the Jesuits in secret for the post World War II New World Order.