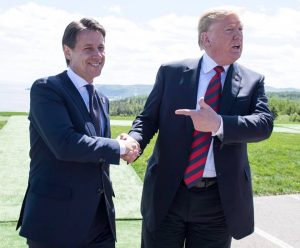 Today is the final day of the Bilderberg meeting, where the Vatican will be participating via Cardinal Pietro Parolin, to discuss the topic of migration, so dear to Pope Francis and the liberal mondialists supporting him. The treatment of migrants is at the forefront of Cardinal Parolin’s agenda in Turin today, as the Vatican makes huge amounts of money with the business of immigration. In fact, The Church of Rome uses the constant excuse that immigration has a very powerful meaning for Catholics and Christians in general, stating there should be an absolute right for immigrants to migrate from poor countries, including a right to immigrate to improve economic conditions. However, the primary duty of each state is to also provide for the common good of the people, and that is usually by protecting its borders, something the Vatican does very well in the smallest nation-state in the world. Pope Francis, in his never ending Jesuit hypocrisy, has called over and over again for world leaders to do more to help refugees and migrants, but in doing so, the Vatican has inevitably helped the very rise of populism and the populist political forces they are now trying to fight at the Bilderberg meeting.

In the meantime, Cardinal Parolin, who some say is also gathering support among the mondialists for his own bid for the Chair of Saint Peter after the resignation of Pope Francis, must be very upset at the great success of the new self-described “populist” Italian Prime Minister Giuseppe Conte during the G7 in Canada. The US president announced on Saturday, that he would be hosting Italy’s new prime minister at the White House. After leaving the G7 summit in Quebec, Canada, Trump tweeted:  “Just met the new Prime Minister of Italy, @GiuseppeConteIT, a really great guy. He will be honored in Washington, at the @WhiteHouse, shortly. He will do a great job – the people of Italy got it right!” 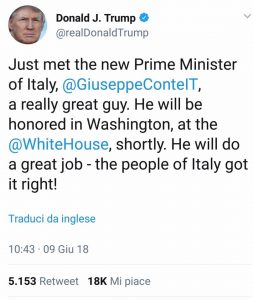 This shows things are changing for the worst for the New World Order, and Italy’s anti-elite Prime Minister Giuseppe Conte is now considered a powerful new ally for Trump against the mondialists who want to destroy civilization, something the Vatican fears deeply, especially when Conte strongly criticized the EU for their immigration policies during the G7 summit. EU Council and Vatican puppet President Donald Tusk hailed what he called a, “first and very good, promising meeting” with Conte at the G7, while drunken fool EU Commission President Jean-Claude Juncker said on the same day that, “He didn’t see divergences between Italy and the rest of the European Union over trade,”when in reality  tensions are rising every day between the EU and Italy’s new government. This is  especially because of Italy’s anti-immigrant interior minister Matteo Salvini, who announced at a rally in Sondrio, Lombardy a few days ago: “Open doors in Italy for good people and a one-way ticket for those who come to Italy to create commotion and think they will be taken care of. ‘Send them home’ will be one of our top priorities.” This is a concept he repeated yesterday in a new video message for Italia News,where Salvini strongly criticized the “illegal business of migration,”adding, “the Italians spend 35 euro’s a day for each migrant to enrich fake generosity,” who arrive in Italy every day,“by the suspicious activity of many NGO rescue vessels we are analyzing one by one.”

Italy’s criminality is something Salvini, in his new role as interior minister, wants to stop. So, the Pope and Parolin must be very worried about the Vatican’s share of the business of migration, that only in 2017, was worth over 4 billion Euro’s a year, of which the Vatican is said to take 281.050.000 Euro.

This is a huge amount of money that the Jesuit Pope does not want to lose because of the populists, so today Parolin and the Bilderbergers are conspiring on how to end Italy’s democratic choice by using the mainstream media and the financial markets to kick them out of office. 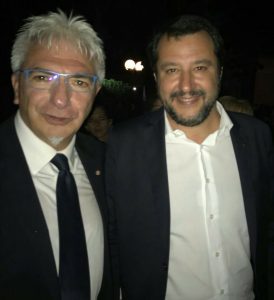 Alfredo Esposito secretary of Italians4trump http://www.italians4trump.it/ and Matteo Salvini on the 7th of June in Rome 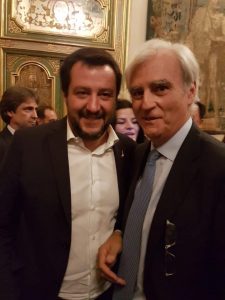 Italians4trump in front of the press

One thought on “Final day of the Bilderberg meeting, and big trouble for the Vatican!!”