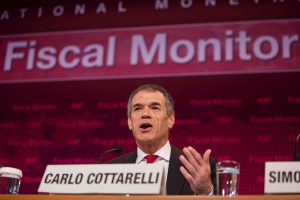 In the last 24 hours, the results of Italy’s elections was suspended, along with the last remains of democracy. The Italian PM-designate Giuseppe Conte, gave up his historic bid to form a populist-oriented government, with the choice of finance minister, Paolo Savona,vetoed by Italy’s president who violated the Constitution in support of the EU.

Professor Savona once criticized the Euro in one of his many University publications, which was enough for President Sergio Mattarella and the Nazi’s of the EU dictatorship to ignore the will of the majority of the Italian people, who are in favor of a new goverment formed by a coalition of the Five Star Movement (M5S) and the  Northern League, the two largest parties in the present Parliament.

This is EU/Vatican dictatorship at its worst. They will form another puppet government in Italy, even as the country speeds toward new elections that could see Italy’s criticism of  the single currency grow exponentially.

“On the 5th of March 2018, Italy will most likely remain in the hands of the left-wing mondialists sponsored and manipulated by George Soros, with the new leading position of Silvio Berlusconi as a populist side show, ready to serve in the grand coalition controlled by the technocrats of the European Union.“

Before yesterday, that prediction would have been hard to believe. According to the Italian Constitution, Cottarelli will take office if he passes a confidence vote in both chambers of the Italian Parliament. It comes as no surprise that supporting such an undemocratic option pushed by the EU dictatorship, are both Renzi’s Democratic Party and, of course, Berlusconi’s Forza Italia.

This alliance was broken when Giorgia Meloni called for the impeachment of President Sergio Mattarella. It was immediately followed by Luigi Di Maio, the head of Italy’s 5-Star movement, who has also raised the possibility of the impeachment of President Mattarella, a puppet of the old Communist president Giorgio Napolitano, plotting behind the scenes. The process of impeachment has been initiated only three times in the past, against Italian Heads of State, but has unfortunately, never succeeded as it could take years.

In the meantime, exactly as I wrote on the 4th of March:

“The most obvious beneficiaries of this useless election are former Prime Minister Silvio Berlusconi, and Matteo Renzi, who apparently made a secret deal to overcome the Five Star Movement and manipulate the populist rise of Matteo Salvini and Georgia Meloni.“

Berlusconi’s compromise is now evident, let’s see if the Italian’s start rebelling to this evident take over of their sovereignty.