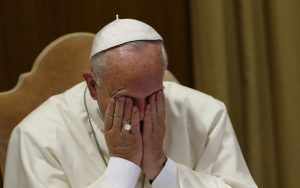 This morning, Cardinal Pell, the most controversial figure in the Vatican today, was back in court. The trial of the top Papal aide for alleged sexual offences will actually be held in secret, after prosecutors announced yesterday, a complete blanket ban on media coverage, as I anticipated in an article published by Infowars two days ago. Yes, tomorrow’s news today, is not just a saying.

Yesterday, prosecutors applied for an injunction to suppress “any report of the whole or any part of these proceedings and any information derived from this proceeding and any court documents associated with this proceeding”.Officially they made the application to “Prevent a real and substantial risk of prejudice to the proper administration of justice”, when in reality they are scared the case could open a Pandora’s Box on a much larger worldwide pedophilia ring that could totally destroy the credibility of Pope Francis.

At a hearing earlier this month, Pell’s barrister, Robert Richter, argued that because the charges related to different locations and were 20 years apart, they should be split and heard in two trials. However, this morning the big new was not the accusations against Pell, or the possibility of two trials, but the fact that Victoria’s county court fired a staff member for accessing the internal computer system of the court and some very sensitive information about the trial. It is not certain whether the attempt was successful, or the amount of information the mysterious staff member actually managed to retrieve, but: “The court takes the management and security of information seriously and has systems in place to detect where information is accessed without authority,”a court spokeswoman said in the last few hours.

In the meantime, the bishops of Chile are in Rome this week for emergency meetings with Pope Francis, who will address the crisis of clerical sexual abuse and cover-ups in Chile.

No wonder, yesterday, during the morning homily, Francis said he has thought about when it might be time to “take leave”of his flock. The Pope made the comments when reflecting on St Paul discerning to leave his flock, and stated: “When I read this, I think about myself, because I’m a bishop and I’ll have to take my leave.”

Francis also said  that retired Pope Benedict XVI: “opened a door” to future popes to retire when he resigned in 2013, confirming what I already announced on the Alex Jones Show three years ago.

I also reported in April, with David Knight, the fact that the Pope could eventually resign to avoid impeachment, as discontent grows in the Vatican every day, and signs of an imminent catastrophy seem to be around the corner.