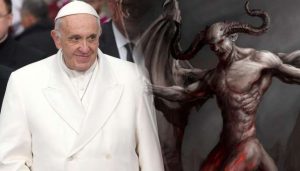 It’s official: Pope Francis is taking a day trip to Geneva on June 21, to commemorate the 70th Anniversary of the Marxist-inclined, World Council of Churches, one of the most controversial organizations of the New World Order.  In fact, top-secret KGB files suggested  years ago, that the KGB and its Bulgarian intelligence affiliate exploited the Bulgarian Orthodox Church for direct influence on the World Council of Churches and the Conference of European Churches. According to Bulgarian historian Momchil Metodiev, in a book published in 2010, Bulgarian intelligence had already identified the World Council of Churches as an “object of penetration” even before the Bulgarian and other East Bloc churches joined the organization in 1961.

The stage is now set for Pope Francis and his Jesuits to shape the final stages of the upcoming One World Religion, in Geneva.

Interestingly enough, Joseph A. Harriss wrote back in 1993:

“Before the opening worship service began at the last general assembly of the World Council of Churches (WCC), in Canberra, Australia, delegates passed through the smoke of burning leaves. This was a pagan cleansing rite. The congregation then listened to recorded insect noises and watched a male dancer impersonate a kangaroo. The next day, as two painted, loinclothed aborigines cavorted, South Korean theologian Chung Hyun Kyung invoked spirits of the dead and exhorted the audience of more than 4000 to read the Bible ‘from the perspective of birds, water, air, trees’ and to ‘think like a mountain [pure unadulterated pantheism]. Quite a display, but was it Christian? Some delegates protested against the animism, spiritism and New Age beliefs that were presented. ”

Since then, the situation is worse, and now, Olav Fykse Tveit, a rather liberal-minded Norwegian Lutheran theologian with socialist tendencies is in charge in this clearly Satanic organization.

He was elected to the post of General Secretary of the World Council of Churches,  on the 27th of August 2009, and was re-elected to a second term in July 2014. In  visiting the Ecumenical Centre in Geneva a very important place for the dark side of the Illuminati, Pope Francis will follow in the steps of his two predecessors Paul VI, who visited the WCC in 1969 (10th June), and John Paul II, who did the same in 1984, (l2th June) stating this move towards ecumenism was irreversable. We need to keep a close eye on this event.

Olav Fykse Tveit wrote: “The Roman Church has now on social issues allied itself with a retrograde form of Christian faith, the religious right.”