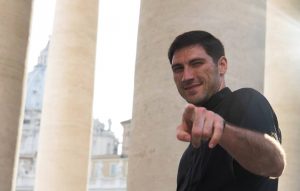 The late Br. Anthony Freeman, LC  the Catholic Seminarian whose death is under investigation

Avvenire,the Italian daily newspaper which is affiliated with the Roman Catholic Church, published a very odd article on the 3rd of April 2018, by top Catholic journalist Father Mauro Leonardi, in defense of the friendship between Eugenio Scalfari and Jorge Mario Bergoglio. The Vatican media does not change the words of Bergoglio on the non-existence of hell, but rather confirms them, as well as the close friendship with Scalfari, going as far as stating that “true friendship means finding common ground not proselytism”and at times being condescending, stating “if Scalfari believes the Pope does not believe in hell let him believe it”.

As for their special friendship, for Leonardi, who also knows the Pope personally,  their friendship is something that doesn’t respect the “Catholically correct” modality, and is not to be considered “Secular or Catholic”.  Father Mauro Leonardi goes as far as stating that “the Pope, when with Scalfari, does not behave as Francis, but as Jorge Mario”.

What does this mean exactly? Does this confirm the Pope is a complete actor in his fake role as Pope, but when meeting with Scalfari he is someone else? Leonardi ended by stating that “their relationship is so free and of high level and that we renounce sometimes for fear of favoring ways of convenience”. Well, it seems the rehabilitation of Marxist Eugenio Scalfari has already started, and the Vatican does not want to rediscuss the non-existence of hell, but rather their true friendship, demonstrating they don’t care about the millions of Catholics disappointed and offended for his interviews.

In the meantime, a new case has erupted in the last few hours in the Vatican with the mysterious death of  an American seminarian, Brother Anthony Freeman, who served Pope Francis in Sunday’s Easter Mass. He was the cross bearer at the Easter Sunday Mass presided by Pope Francis on April 1, 2018, in St. Peter’s Square in Rome.  The Italian authorities are treating this death as “related to another murder”.

You can see Brother Anthony Freeman carrying the processional cross during the entrance procession in this video:

Brother Anthony Freeman, who was going to be ordained a deacon this upcoming July 7 in Houston, Texas  received on February 26th, 2017 the ministry of acolyte in the controversial Legionaries of Christ International Collegein Rome, connected to the pedophile affairs of its late founder. A place where Freeman lived since 2013.

He  was also the author of the book, One Step Closer: 40 Doses of Motivation, Hacks, andExperiences to Share with Millennial Catholics.  Rome Reports recently interviewed Brother Anthony on this book:https://www.romereports.com/en/2018/03/31/seminarian-transforms-instagram-account-into-motivational-book/

In his last post on Instagram he wrote:  “Christ is Risen Alleluia! After an 8 day silent retreat I was blessed to meet Pope Francis today and serve the Easter mass!”

So, what is really happening in the Vatican when people serving Mass on Easter Sunday are found dead the day after?