In an interview on Monday with Swiss newspaper Weltwoche, Steve Bannon made the following statement in regards to the results of the 2018 Italian elections:

The rather naive Bannon, who has only been in Italy since Thursday to observe the election, compared the success of the far-right League to Trump’s victory in the 2016 presidential election, stating bombastically: “They got 20 percent of the votes in Tuscany, which is traditionally a turf of the left, or the center left: This is equivalent to Wisconsin going to Trump…” . 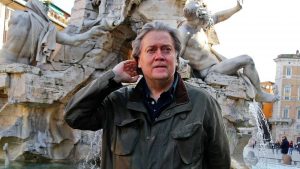 Well, dear Bannon, you are correct that Matteo Salvini has indeed gathered a growing number of supporters as the the leader of Italy’s Eurosceptic Northern League that has enjoyed a surge in popularity, becoming the country’s largest conservative party. It is still technically impossible for him and his party to lead any kind of goverment, even with the help of coalition allies Georgia Meloni and Silvio Berlusconi, as it is impossible to form a government as they only reached 36% of the electorate, not 40% as required by the current electoral law, built to force a much wider and bigger coalition for the Italian governability. This scenario will only be possible with the compromise and the possible alliance with  the prevalently left-wing 5Star Movement in the hands of George Soros, now the first party in Italy with 32.36.

However don’t believe that the former prime ministers Silvio Berlusconi and Matteo Renzi are the big losers in the 2018 Italian elections, as voters opted for anti-establishment parties like the Northern League. In reality, Matteo Renzi, who gathered only 20% of the Italian vote with the Democratic Party, has already a place planned for him by the EU establishment in Bruxelles. Silvio Berlusconi, instead, owns the symbol of the Northern League party that he literally bought back in the year 2000, when Salvini’s party, at the time in the hands of Umberto Bossi, was risking bankruptcy:

In the next few days, Silvio Berlusconi’s coalition with the Northern League will be forced into something like the German Große Koalition, with the Democratic Party and The Five Star Movement  already coming together under the supervision of the Italian President Sergio Mattarella shaping yet another technocratic government fully controlled by the EU and George Soros, and in the hands of the present Prime Minister Paolo Gentiloni, who might not accept his new opposition role given by Renzi.

The populist victory described by Steve Bannon unfortunately has no chance to create a new Italian Government in 2018, because the system is rigged. So, why did Bannon previously suggest he supported Matteo Salvini, head of the Northern League, and why does he believe a impossible coalition between the League and the 5Star Movement could work for Italy remains a mystery, as Berlusconi, who owns the Northern League symbol, will never let that happen, or will he? The only way he will let this happen is within a Great Coalition German style if not he will be forced into the opposition by a Soros left wing alliance that Bannon seems to serve with his disinfo.