Hollywood is exploding with scandals. People who join the Ordo Templi Orientis, or other secret societies of the Illuminati Network dedicated to sexual magick and Crowleyanity, are slowly being outed worldwide as perverts and social delinquents, but their real beliefs and occult practices remain hidden, for the most part when they are not exposed like in 2014, when a incredible and shocking revelation was made by a child abuse victim of Crowleyanity: http://www.breitbart.com/london/2014/09/23/kidwelly-wales-satan-cult/

The elite enjoy feasting on what the Satanist Aleister Crowley called Cakes of Light, with the special ingredients of semen, blood and honey. They also partake of sex with minors and enjoy cannibalism, at least symbolically. In 2011, at the Museum of Contemporary Art’s Annual Gala in Los Angeles, the O.T.O. member Marina Abramovich and Deborah Harry, created some fairly realistic nude effigies. 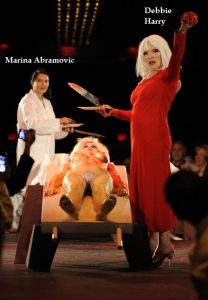 Two women were put on display before a crowd of perverts, who appeared to feast on their bodies. They call it “art” and that’s enough for some people to dismiss it as just “Postmodern snobbery”.

There is much more to it, as the latest video produced by David Griffin and Leslie McQuade, who are two adepts of the occult arts that went to Hollywood to investigate this growing Satanic phenomena, and interviewed me on the subject.

Attempting to understand the lust for power of the O.T.O and other occult groups, we must ask the questions “Where did they learn this?” “Why is this ‘art’ to them?” “If this is what they do in public, what in God’s name do they do in private?” Well, in this short documentary produced by Griffin and McQuade, these questions are answered. 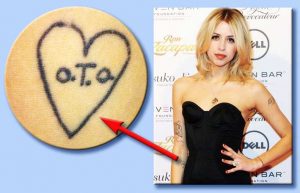 The most depraved of sex acts are encouraged inside insidious orders like the O.T.O., and have become more evident in Hollywood, just check out “Bon Appétit”, the song by Katy Perry, where in the video she is cooked by chefs, and offered as a meal to a party of elite guests. It directly alludes to bizarre rituals the occult elite practice behind closed doors – and in plain sight every day in Hollywood, as revealed in: EXPOSED: Hollywood Satanism, Ritual Murder, and Aleister Crowley (Full Documentary With Leo Zagami)