Earlier this month, I wrote an article about Pope Francis’ refusal to renew Cardinal Gerhard Ludwig Müller’s mandate as Prefect of the Holy Office. Immediately afterward, we saw the unfortunate death of Cardinal Joachim Meisner, Archbishop Emeritus of Cologne, best known recently, as co-author of the Dubia sent to Pope Francis.

However, even if the German station, Domradio stated that Meisner died “peacefully” in his sleep while on vacation in Bad Füssing, most of us know by now that is a total media fabrication. Meisner was in fact upset with Pope Francis until the last hours of his life, regarding Müller’s treatment, and the way Bergolio fired him. These actions triggered an internal war in the Vatican, where the pedophile network is now basically divided into two factions.

One faction, closer to Pope Francis, and the Gay lobby, wants a more liberal Church, ready to embrace homosexuality for priests, and an open support for Islam and the upcoming One World Religion, that will gradually push for the acceptance of pedophilia. This faction is represented by Cardinals such as Coccopalmiero, involved in the Gay Orgy raid, or Godfried Cardinal Danneels of the St. Gallen Mafia. The other faction, the more conservative one, mostly controlled by Pope Ratzinger the Pope Emeritus, is instead contrary to any liberal change imposed on the Catholic Faith by the Jesuit Pope, but still hides terribile compromises and links to the infamous pedophilia rings that hide behind the Catholic hierarchy. 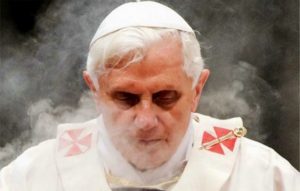 Then last Saturday, we heard the harsh criticism towards Pope Francis in Ratzinger’s own words, that were recited in the Cathedral of Cologne during Meisner’s funeral. This was a sign of open War between the two pedophile factions, and soon after the liberal faction, filtered yet another scandal, that could damage the conservative uprise in the Church, and silence Pope Ratzinger forever.

There is breakings news that in Regensburg 547, children of the choir of the Ratisbonian Cathedral, directed for 30 years by Pope Emeritus’ brother, George Ratzinger, have been abused in various ways over four decades, and 67 were also subject to acts of pedophilia from Catholic priests and teachers. Lawyer Ulrich Weber’s final report disclosed by the German media, states that 49 perpetrators have been identified, and George Ratzinger, who was the director of the ensemble for thirty years “knew and closed his eyes”.

Pope Francis and his liberal faction have also done this to isolate the then bishop of Regensburg, Cardinal Gerhard Ludwig Müller, ex- prefect of the Congregation for the Doctrine of the Faith, who admitted the existence of the abuses in the German choir back in 2010, and is now accused of refusing dialogue with the families of the victims. The former prefect his also accused by Marie Collins, a resigning member of the Pontifical Commission for the Protection of minors, and a victim herself , of having done little to fight pedophilia in the Vatican, and even going to the extent of hindering the work Pope Francis’ team. This is not completely true, as it was Pope Francis who ordered Cardinal Gerhard Ludwig Müller to act in this way.

Well as many Vatican experts have already written, this Pontifical Commission was a joke anyway, and Peter Saunders, a Briton who was abused by two priests as a teenager, left the Commission in disgust, stating it was only a “ public relations exercise”.

3 thoughts to “War of the Pedophiles explodes in the Vatican”