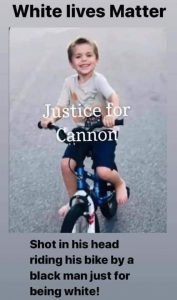 Two days ago, Darius Sessoms, a black 25-year-old man was charged with first-degree murder after he shot and killed a 5-year-old boy last week in Wilson, North Carolina.

Austin Hinnant, the father of the victim, told the journalist he was inside the home when his son, Cannon, was playing outside and was shot. Hinnant says he ran outside and scooped up his injured child and held him in his arms. “I screamed ‘somebody help me, please help me save my son,’” he said.

In a news release, the Wilson Police Department said officers were dispatched to the 5100 block of Archers Road on August 9 in reference to a shooting and found a 5-year-old suffering a gunshot wound, who later died at a nearby hospital. Police identified Sessoms as a suspect and arrested him after he was found Monday in a Goldsboro residence about 30 minutes south of Wilson. It is unclear if Sessoms has an attorney but I’m sure Black Lives Matter will find him one.

We need to stop this madness or Civil War will be the only answer because according to Jean Kim, a psychiatrist for the US Department of Health and Human Services and assistant professor at George Washington University: “Anger is a public epidemic in America; it contaminates everything from media controversy to road rage to wars to mass shootings.”

Kim says that anger is addictive but the death of an innocent 5 year old child should finally make everybody in the States realize where this is heading.The way we use social media can be viewed through the notion of ‘play’. According to the late Dutch cultural historian and play theorist Johan Huizinga, play is characterized by fun, freedom, spontaneity, and creativity; while not overtly serious, it can have serious outcomes. Huizing believed that it was in “playing” that we reveal our true selves, however, if play becomes too serious, no longer fun and takes on notions of overt seriousness then it is, in fact, corrupted, leading to an age of sensationalism, anger, and outrage which impacts the quality of important discussions, narratives, and news.

Let’s all pray for Cannon and spread this important information not to attack, but to silence once and for all the false narrative of the left that wants to divide and conquer. The strategy of division and rule is an old one, but still an effective tool we need to defy in this day and age in order to save the greatest nation on earth, the USA.