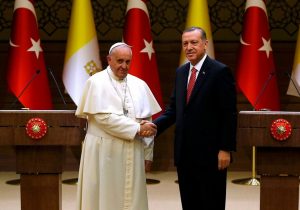 In 2014, one of the highlights of the Pope’s trip to Turkey was his visit to the Hagia Sophia, in Istanbul, where he stood alongside a top Islamic cleric in a highly-symbolic moment that should have worried many Christians, and I was not surprised that on Thursday, the Council of State, Turkey’s top administrative court, reached a unanimous verdict declaring that secularist President Kemal Atatürk’s 1934 decision to turn Hagia Sophia into a museum was unlawful.

A proud Erdoğan announced to a shocked world a day later, that the Hagia Sophia mosque will be re-opening for Muslim prayer on July 24, 2020. “Hagia Sophia will start functioning as a mosque after 86 years. I hope this decision will benefit all of humanity. The doors of Hagia Sophia will be open to everyone,” conveniently adding, “Open to all, Muslims and non-Muslims.”

The World Council of Churches immediately called on Erdogan to reverse his decision, and Patriarch Bartholomew, the Istanbul-based spiritual leader of the world’s Orthodox Christians, called it disappointing. The Vatican and Pope Francis remained utterly silent about the conversion of Hagia Sophia into a mosque causing concern in the Christian world,

but yesterday under pressure Pope Francis broke his silence on the matter saying he’s “pained”by Turkey’s decision to convert Istanbul’s Hagia Sophia back into a mosque.   Speaking at his Sunday service in the Vatican, Bergoglio added that his “thoughts go to Istanbul.”

It is pure theatre and lies by the usual Jesuit manipulators who have embraced Islam a long time ago, and are secretly working with Turkey to convert Istanbul’s Hagia Sophia into a new home for their One World Religion project that the Pope formally began last year when he signed the document on so-called “Human Fraternity” in the United Arab Emirates.

The decree regarding the former Church and Mosque of Hagia Sophia came after a Turkish court revoked the site’s 80-year-old status as a museum, provoking an international furor, but Turkish President Recep Tayyip Erdogan had already laid the foundations for this place to become a future icon of the One World Religion when he said: “Hagia Sophia will continue to embrace everyone in a more sincere, unique way with its new status.”

Turkish President Recep Tayyip Erdogan, who is covertly acting as a Jesuit agent with the secret Blessings of the Holy Father, rejected international condemnation over the decision to change the status of Istanbul’s landmark Hagia Sophia from a museum to a mosque, saying it represented his country’s will to use its “sovereign rights.” But the sad truth is, this place will become the new home of the upcoming One World Religion of the Antichrist. For this reason, a controversial theologian who supports the One World Religion view quoted the same Pope Francis on Vatican II, to justify in the eyes of Christianity, Turkey’s decision of returning the world’s largest Byzantine basilica to its conquered status as a mosque.

Giles Fraser, a liberal Anglican and former columnist for The Guardian says he“cannot but applaud” radical Islamic President Recep Tayyip Erdoğan’s “desire to return this once holy place back to a mosque,Christians should be delighted,” if Hagia Sophia reverts to being a mosque because, “Muslims are our brothers and sisters with whom we share a faith in the living God,” Fraser argues Fraser, a scholar of philosopher Friedrich Nietzsche author of The Antichrist, claims he is offering, “no less an authority than the pope himself,”to “those Christians who believe that Muslims and Christians worship something different,”and quoted Pope Francis’ tweet ahead of his trip to Morocco last year to make his case that Christians and Muslims worship the same God: “We Christians and Muslims believe in God, the Creator and the Merciful, who created people to live like brothers and sisters, respecting each other in their diversity and helping one another in their needs,”the pontiff tweeted in March 2019. “This view goes back to the Second Vatican Council, where it was affirmed that Muslims, ‘together with us adore the one, merciful God,'”writes Fraser, citing Lumen Gentium.

In the past, Erdoğan, who is very close to Pope Francis,gifted Turkey’s president with an “angel of peace” during Erdogan’s visit to the Vatican in 2008, repeatedly calling for the stunning building to be renamed as a mosque and in 2018, he recited a verse from the Quran at Hagia Sophia. “Those who do not take a step against Islamophobia in their own countries … attack Turkey’s will to use its sovereign rights,”Erdogan said at a ceremony he attended via video-conference on Saturday. The colossal Hagia Sophia was built 1,500 years ago as an Orthodox Christian cathedral and was first converted into a mosque after the Ottomans conquered Constantinople, now Istanbul, in 1453, before becoming a museum in 1934, but things have changed since Freemasonry supports the Jesuit plan to establish with the Higher Committee of Human Fraternity the upcoming One World Religion, a subject I have analyzed in detail in my book, Confessions of an Illuminati Vol. IV.

Other related articles on this subject: