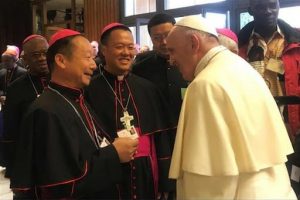 Chinese-communist authorities have arrested Bishop Augustine Cuī Tài as persecution of the real Catholic Church in China ramps up following the secretive Vatican-China accord made by the Jesuit pope for a state-run Catholic Church.

From the diocese of Xuānhuà near Beijing, Bishop Cuī has been illegally detained (without judicial procedure) since 2007 and allowed to return home from time to time for certain festivals, such as Lunar New Year and Mid-Autumn Festival. Prior to his most recent arrest, Bishop Cuī was spending Easter in the diocese for his longest break from detention in 13 years.

A source told the Union of Catholic Asian News the authorities lacked cause to keep the bishop“in custody for as long as 13 years intermittently.”Bishop Emeritus of Hong Kong, Cardinal Joseph Zen who has always been highly critical of the Vatican deal and has been calling for the release of Bishop Cuī, explained after the Vatican formalized their new relationship with China in February that there are three phases to what he calls the Vatican’s “total sellout” of the underground Catholic Church.

According to Cardinal Zen, “The first step was that secret agreement [the Vatican-China agreement circa Sept. 2018] for the selection of bishops, and then the legitimization of the seven excommunicated bishops (asking the legitimate, underground bishops to step down) and then finally, last June came out that document — the so-called pastoral guidance encouraging people to join the [Catholic] Patriotic Association.”

Since the secretive Vatican-China accord, Zen has lamented that persecution has intensified into confusion in what used to be the Catholic Church in China, and is now another institution in the hands of the CCP. Echoing Zen and speaking of the recent arrest of Bishop Cuī, the project officer of the Justice and Peace Commission of Hong Kong diocese said, “The situation of religious freedom in China has not only not improved but has worsened.”

Italian bishop and Vatican official Claudio Maria Celli, who helped draft the provisional 2018 Vatican-China deal, recently said the Holy See will likely renew its deal with the Chinese Communist Party in September. Millions of Chinese Catholics are now pushed towards a deal with the Satanic forces of the CCP, Pope Francis, and his Jesuits.