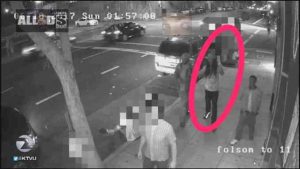 President Trump said that the United States would designate Antifa as a terrorist organization and since then the FBI has become proactive in investigating the infamous group. They’ve been keeping a close eye on suspected names on Antifa membership rolls, tapping phones, questioning on the street, and conducting surveillance operations at their regular weekly meetings.

One of the FBI reports states that Antifa has held meetings in Mason’s Hall in downtown Baltimore at 3101 Wyman Park Dr every weekend for the past year and they increased in frequency since President Trump’s disparaging remarks about the city a couple of weeks ago. The group was easily identified as an Antifa Klan by their vocal opposition to our president as well as things like their clothing – “F**k Trump” shirts being commonly worn by all.

At one such meeting in Baltimore in early June, a very familiar face to all Americans was seen leaving the premises – Malia Obama, eldest daughter of former president, Barack Hussein Obama. The FBI refused to comment in detail about their discovery of the Obama child in membership but did provide a short statement to the press. Special Agent Esteban Contreras said: “We have been keeping an eye on this group for months. They’re troublemakers. You can tell. They have nothing good to say about Trump and organize policy protests regularly. I can confirm that Malia Obama was seen amongst the group and that she has attended at least three meetings. I will not, however, speculate on details of her involvement in terrorist activities at this time.”

This news will come as quite a blow to the Obama family as it exposes more of their terrorist activity to the world. It will be interesting to see how they and the Democrat Party try to put their spin on it, but it seems they are trying to have it censored in every way they can.

In the meantime, the fact that Antifa held meetings in a Mason’s Hall in downtown Baltimore confirms once again the infiltration by leftist extremists, Muslims, and Satanists to the once illustrious and honorable institution of Freemasonry that was not even capable of protecting their own statue of Albert Pike from being torn down. Interestingly enough, the large and lavish Mason Hall Auditorium in Baltimore is located on the campus of the John Hopkins University, home of the Coronavirus Resource Center.