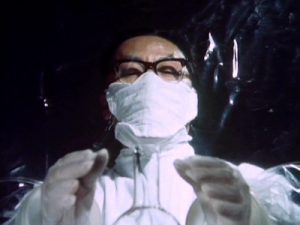 “Survivors” is a British post-apocalyptic fiction drama television series created in the 70s by Terry Nation for the BBC that was broadcast from 1975 to 1977, and the first episode was entitled “The Fourth Horsemen,” in a clear reference to “The Four Horsemen of the Apocalypse” found in the last book of the New Testament, the Book of Revelation, that as most of you knowdetails the cataclysmic events that will unfold before the Second Coming of Christ. One of these events will be the arrival of the Fourth Horsemen of the Apocalypse, which is believed by many Christian today to be represented by the novel coronavirus, as the Four Horsemen and typically represented as Death, War, Famine, Pestilence or Plague, in this case, COVID-19, or to be more precise the Wuhan virus.

The prophetic original tv series “Survivors” concerned the plight of a group of people who survived an apocalyptic plague pandemic, which was accidentally released by a Chinese scientist just like it allegedly happened in Wuhan last year, which quickly spread across the world via air travel, one of the main reasons the Chinese virus epidemic spread. Referred to as “The Death,” the fictional plague  featured in “Survivors,” one of the TV series that scared me the most as a kid, that was much deadlier than COVID-19, and killed most people within a matter of weeks of being released, leaving a few survivors struggling without electricity, running water or government in its aftermath.

In 2008, the BBC began airing a brand new version of “Survivors,” with Adrian Hodges as the main writer. In the credits, this version is said to be based on Terry Nation’s novel Survivors (1976), rather than the previous TV series. This statement was made to avoid copyright problems, as the rights to the television series were vested with a different legal entity from the rights of the book.  Set in the first decade of the new Millenium, the new series focused on a group of ordinary people who survive the aftermath of a devastating viral pandemic referred to this time as the “European flu,” without referencing China, of course, in the new age of political correctness, left-wing media bias, but still killing most of the world’s population by causing cytokine storms in the body’s immune system. The new libtard series sees the characters,  who are this time no longer all English, but more reflective of the multicultural and diverse English society loved by the left,struggling against terrible dangers in a world with no society, no police, and no laws, just as in the original “Survivors” series from the 70s.

The 2008 series ran for two seasons and was very successful especially amongst young viewers, but suddenly the BBC announced on April 13, 2010, that due to poor viewing figures “Survivors” was canceled announcing that there would be no third series. However, the real reason for the interruption of this otherwise brilliant TV series was not the poor ratings but rather to avoid spreading panic as the 2009 flu pandemic or swine flu influenza pandemic that lasted from early 2009 to mid-2010, was starting to create fear and concerns among the general population. The second season of the new “Survivors” was even delayed because of the real-life swine flu epidemic and thus was broadcast in January 2010 when the pandemic was almost under control and out of the media.

In 2013,  the 2008 “Survivors” was added to the Netflix platform, becoming immediately the highest watched the program and consequently, Netflix was said to be in contact with the BBC for discussions on continuing the program but the elite of the New World Order stopped the project altogether, and on April 1, 2017, the series was permanently removed from the Netflix platform. Netflix premiered at the start of 2020 the infamous “Pandemic” series about global outbreaks featuring an unusual Nostradamus-style Bill Gates.  The series “Survivors” couldn’t go on because it was too close to reality for the Illuminati controllers of Silicon Valley. You don’t believe me? Check it out yourself, this is the preview for the last “Survival” series published by BBC America on their Youtube channel on the 20th of January 2010:

So are we all doomed and will we end up like the Survivors?  In an interview with the Italian daily newspaper, “La Repubblica,” Pope Francis stated today that he is praying for an end to the coronavirus pandemic, and asks everyone to be close to those who have lost loved ones, but he knows that in the

Holy Land they are preparing for the arrival of the Messiah, stating that the strict quarantine will bring about the condition the Jewish sages say precedes the Messiah: universal observance of the Holy Sabbath. Stay tuned to leozagami.com for all the latest on the Chinese Virus and the start of the biggest crisis in modern times preceding the possible return for Christians, or arrival for the Jews, of the Messiah.

Archbishop of Colombo, Sri Lanka, Malcolm Ranjith  serving since 2009, announced today that he is convinced that COVID-19 is a manmade bioweapon and that the United Nations should bring the people who are responsible for this to justice.  There are 28 cases of Wuhan virus at the moment in Sri Lanka.

3 thoughts on “Will we be the “Survivors” of the Fourth Horsemen? Pope Francis and most Rabbi’s are preparing for the Messiah”