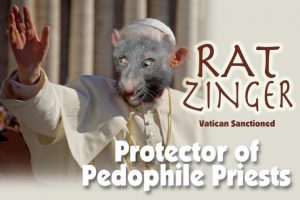 Pope Emeritus Benedict XVI has finally responded to the growing criticism towards his essay regarding the church and the sexual abuse crisis, that I wrote about in April 2019:

The retired pontiff, who marked his return earlier this year with a 6,000-word document that has been highly critical of the present situation of the Catholic Church, said that the many negative reactions he received after the publication have confirmed his central thesis that apostasy and alienation from the faith are at the heart of the present crisis in the Catholic Church.  In a brief statement in reaction to such criticism published recently in the German magazine “Herder Korrespondenz,” the former pope pointed out with great clarity to a “general deficit” in the reaction to his essay, saying that many critical responses missed the very point he was trying to make from the very start.

The essay by Pope Emeritus Benedict XVI that was published in April, 2019 by the Catholic News Agency, the National Catholic Register, and in the original German by CNA Deutsch as well as other media, described the impact of the sexual revolution of the 60s and the collapse of moral theology, before suggesting how the Catholic Church of today should respond by recognizing that “only obedience and love for our Lord Jesus Christ can point the way.”

Reactions to the essay that seem critical towards the state of the church under Pope Francis have been particularly strong in Germany, where insiders say the former pope, a native Bavarian, has long been subject to sustained criticism from certain progressive quarters. Benedict XVI cited the example of a response to his essay from a German professor of history, pointing out that while the professor’s response was four pages long, “the word God does not appear [once],”even though apostasy was the central claim of the scholar’s argument. Such a critique of his essay thus “shows the seriousness of a situation, in which the word ‘God’ in theology even seems to be marginalized.”

The former pope wrote: “Therefore, the central issue I wanted to raise is not being discussed.”

Criticism of this kind only served to demonstrate “the seriousness of the situation,” Benedict continued, “in which the word God often appears to be on the margins, even in theology.”

God has been marginalized more and more by the Satanic Church of Pope Francis that is continuing the mission of the Second Vatican Council of destroying rather than preserving the last remains of Christianity in the Catholic Faith, to facilitate the establishment of a One World Luciferian Religion.  Poor old Ratzinger played his role by participating in the Second Vatican Council and resigning in 2013. Ratzinger was just thirty-five years old, in 1962, when the Second Vatican Council began. Already known as a brilliant theologian, he attended all four sessions as peritus, or expert, to Cardinal Joseph Frings, Archbishop of Cologne. Following each session, Ratzinger wrote an account and analysis of the theological debates among the bishops, giving his verdict on what had been achieved. These four pamphlets make up a book that breathes “the Spirit of Vatican II”—the spirit that Ratzinger, as Cardinal Prefect of the Vatican Congregation for the Doctrine of the Faith (CDF) from 1982 to 2005, would later start denigrating.

As far as the young Joseph Ratzinger was concerned, episcopal collegiality, papal authority, the liturgy, the question of religious freedom, ecumenism, and the church’s approach both to other religions and to secular culture were all in urgent need of reforming scrutiny by the council fathers. At the time, the future Pope Benedict XVI was counted as one of the most influential “progressives,”so in the end Benedict XVI has only himself to blame when he stands before God.

One thought to “Ratzinger Shocking Response Regarding His Controversial Essay”