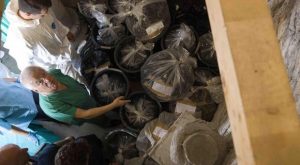 Prof. Arcudi and the bones…

Early today, the Vatican made an official statement that disappointed many people worldwide when they communicated that they are refusing to go forward with the laboratory tests required by a consultant of the Orlandi family on the huge number of bones accidentally found during the search for Emanuela Orlandi in two ossuaries adjacent to the tombs investigated at the Teutonic cemetery. The consultant of the Orlandi family was impressed by the number of bones found, stating they were also of minors.

“During the investigations of forensic anthropology, Prof. Arcudi found no bone structure dating back to a later period than the end of 1800,” said the official note issued this morning by the Vatican press office, after a supposed in-depth verification of the ossuaries in question made  by Vatican expert Professor Giovanni Arcudi at the Teutonic College. The Vatican said that the consultant of the Orlandi family had originally asked for, “Laboratory tests on about 70 bone finds; but Prof. Arcudi and his team did not endorse the request because the same bone structures have very ancient dating characteristics. ”

In 1978, Professor Giovanni Arcudi was awarded the honor of Commander of the Equestrian Order of St. Sylvester Pope by Pope John Paul II, and he is a Jesuit agent close to the present Pope who will do anything to protect the Church from one of the biggest scandals to date. This is what Professor Arcudi said in a recent interview regarding his privileged relationship with the Vatican that should give a clear view on his loyalty to the Holy See:  Of all the awards I had for my “service merits,” certainly the most prestigious, and one that most honors me, is related to my relationship with the Vatican City State: my professional commitment and my services for the Holy See have in fact, received recognition with the prestigious award that was given to me by the late Pope John Paul II.

The Vatican is covering-up something big by refusing further analysis of these bones,“The samples were collected and held at the Vatican Gendarmerie Command at the disposal of the Italian Department of Justice,” and according to the same statement the operations ended today “at 12.30pm” local time adding that, ” Professor. Giovanni Arcudi assisted by his staff, in the presence of the trusted expert appointed by the Orlandi Family has completed the morphological analysis of the finds found in the ossuaries (several hundred partially intact bone structures and thousands of fragments). “

The Vatican overly emphasized that:“In communicating these operationsthe Holy See confirms its desire to seek the truth about the disappearance of Emanuela Orlandi and categorically denies that this attitude of full cooperation and transparency can in any way mean, as stated by some, an implicit admission of responsibility .”

The Vatican propaganda ends with this statement that mentions the bones found last year in Villa Georgina:

The search for truth is in the interest of the Holy See and the Orlandi family. The transparent will of the Holy See has already emerged, in addition to the investigations and examinations in progress at the Campo Santo Teutonico, in those carried out by the Italian authorities, following a report by the Vatican Gendarmerie, at the headquarters of the Nunciature in Italy, at Villa Giorgina, for which the request for dismissal by the Public Prosecutor’s Office at the Court of Rome was communicated on the 3rd of July. According to the findings of the Italian authorities – recalls the note –on July 25th they started the procedure for returning the bones found at Villa Giorgina, the dating of the finds goes back to a period between 90 and 230 AD This shows there is no  connection with the painful disappearance of Emanuela Orlandi “.

Nothing changes without a war or a coup d’etat in a place like Rome where there are many more dark secrets buried.