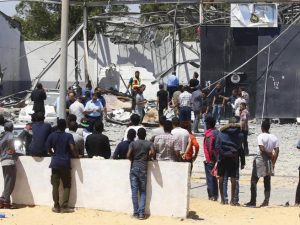 In the last few hours, a threat has been made by one of the two factions of freeing all migrants from detention centers in retaliation for the massacre at Tajoura last Wednesday, stating their safety can no longer be guaranteed. Among them there is said to be a big number of Isis terrorists that will soon find a new home in Europe.

The Italian newspaper Il Corriere della Sera reported that Fayez al-Sarraj, the Chairman of the Presidential Council of Libya and Prime Minister of the Government of National Accord (GNA) is preparing to release 8000 prisoners in the coming days and there could be hundreds of thousands more that could be on their way if the conflict between al-Sarraj and its counterpart Haftar, head of the Libyan National Army, (LNA) is not stopped as soon as possible.

This new crisis could be the final blow to the already frail situation at EU borders and could jeopardize the life of U.S. tourists visiting the Old Continent in the coming months, so stay safe and keep yourself informed at all times.