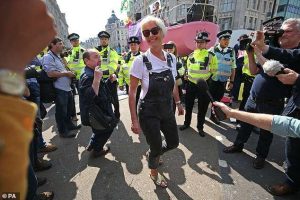 I always disliked superficial Hollywood activism, a growing phenomenon where rich privileged people from the elite with no sense of reality express support for certain liberal causes, mostly in a bid to generate a positive public image, or to alleviate the creeping sense of guilt because of an unnaturally lavish lifestyle. Everyone knows about this phenomenon, that for most people is not shocking and continues without any complaints from the libtards and the leftist media that support this hypocrisy. However, left-wing actress Emma Thompson was branded a “first-class hypocrite” last night after jetting to New York just days after backing climate protests that brought chaos to the city of London.

Emma Thompson, who is a Jeremy Corbyn supporter, took her personal luxury seat in the cabin of a British Airways flight from Heathrow to JFK on Friday morning after publically demanding earlier: “We should all fly less.”  First-class BA flights to New York like this one cost up to £18,000 and generate nearly two tons of carbon dioxide that are considered the main driver of climate change for each passenger in the elite cabin.

If you say that you believe in climate protests but you are not willing to even give up your own First-class cabin treatment, then you are clearly a hypocrite and if someone’s behavior is at odds with their principles, it could be that they are lying about their principles in order to achieve some ulterior goal, in this case helping to implement the New World Order.