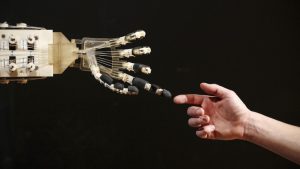 Robot ethics, sometimes known by the short expression “roboethics”, concerns ethical problems that can occur today in the world of robots, such as whether robots pose a threat to humans in the long or short term, and whether some uses of robots are problematic (such as in healthcare or as “killer robots” in war).

“Robo Ethics. People, machines and health” is the recently announced title for the Workshop that will take place at the Vatican during the next plenary assembly of the Pontifical Academy for Life to be held from 25 to 27 February 2019.

academyforlife.va describes the event in the following way: “The goal of the Workshop is to provide updates on the characteristics of the technologies in the field of robotics: namely, through those who work on the ground, identify and shape the questions rising in the field from the anthropological and ethical point of view and propose some ethical criteria and possibly some recommendations, keeping alive the attention to the global dimension of the theme. First session (Monday 25, afternoon)will focus on state-of-the-art technologies and different approaches to robotics’ research and development. The second session (Tuesday 26, morning)will explore socio-anthropological implications, i.e., how robotics changes the ways of knowing and understanding the world, perceiving relationships, and understanding the body and social coexistence. Third session (Tuesday 26, afternoon)will address the ethical implications of robotics in the health sector.”

This is the first stage in a process that will continue until 2020 when the next plenary session of the Vatican and will be dedicated to the other hot topic of the moment, Artificial Intelligence.

The Academy says that: “The fields of robotics and artificial intelligence are distinct, but closely related. They both contain so much information and so many anthropological and ethical questions in themselves that we are dedicating two assemblies to these subjects. We hope that, by having two different assemblies dedicated to two different aspects of the larger field of robotic technologies in general, we can address the opportunities and challenges of these connected technologies in greater depth.”

Moreover, this year’s appointment coincides with the 25th anniversary of the Academy’s establishment. For the occasion, Pope Francis wrote a long letter to the President, Monsignor Vincenzo Paglia, where he touches on various issues relating to the relationship between technology and modernity.  It is a worrying scenario that the Pope describes in his letter to Monsignor Vincenzo Paglia “The threshold of basic respect for human life is being crossed, and brutally at that, not only by instances of individual conduct but also by the effects of societal choices and structures.”

The document was presented in the Vatican by Monsignor Paglia himself, together with Monsignor Renzo Pegoraro, Chancellor of the Academy, Professor Laura Palazzani, Professor of Biolaw and Philosophy of law at Lumsa, and Father Paolo Bennati, Professor of Moral Theology and Ethics of technology at the Pontifical Gregorian University.

As we all know, Science fiction has long explored these themes because they involve many moral and ethical implications of great importance for humanity, but very few people know that films like 2001 – A Space Odyssey  were inspired by the Jesuits and the legendary figure of the late Pierre Teilhard de Chardin a French idealist philosopher and Jesuit priest who also inspired The Exorcist.

There is a close connection between Satanism and technology that I will be investigating further in my upcoming book Confessions of an Illuminati Vol. 6.6.6. The Age of Cyber Satan,  Artificial Intelligence and Robotics. 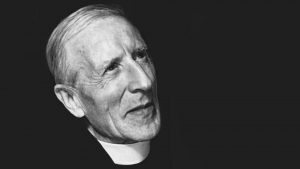 Jesuit priest and scientist Pierre Teilhard de Chardin (1881-1955). Although a monitum was issued in regard to some of Teilhard’s ideas, he has been posthumously praised  by Pope Francis in the 2015 encyclical, Laudato si’.

In the meantime, two days ago, the Church of Satan began posting videos about sex robots online – but it wasn’t a bandwagon-jumping attempt by the Church of Satan to compete with the Vatican because as I pointed out already in an article I published on the 4th of January 2019 on my blog, the founder of the Church of Satan, Anton Lavey, predicted sex robots more than two decades ago and today’s Satanists still believe they could save us all.

The Church of Satan’s Magistra Blanche Barton wrote on their official website a few years ago: “Let’s review the Five Point Program which Dr. LaVey set forth in the late 1980’s as our plan of action. Points four and five are the development and promotion of humanoids, and of total environments. Scientists and techno-geeks are doing a bang-up job in these departments, developing exceedingly realistic artificial human companions, both of the Real Doll and virtual Facebook-friend variety. There has also been great progress made in creating total environments—commercial ventures like Disneyland and the Wizarding World of Harry Potter abound, while any number of other permanent and faire-type periodic re-enactments allow for total immersion. We have virtual worlds galore to explore in the form of video games, many now outpacing movie sales. Movies and television series are becoming more enveloping, the bigger the budgets get. As in ancient Rome, we have more than enough entertainments to distract us.”

Magus Peter H. Gilmore, High Priest of the Church of Satan confirmed this on the 15th of January to the British Newspaper Metro, stating  that Anton LaVey promoted the idea of “artificial human companions”as a means for people to exercise sexual or other drives with a device that might gratify their fantasies without having to involve other human beings. This would permit complete control over the details of their fantasy. Now that robotics is advancing, it seems that this field of endeavor is seeing new increased activity as both the Catholic Church and the Church of Satan move towards the implementation of a new Satanic world.