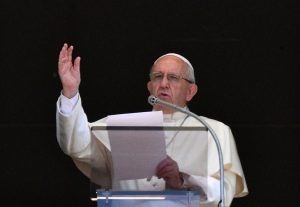 A few days ago at the Intergovernmental Conference organized by the globalists in Marrakesh, the Order of Malta made an important statement through their Grand Chancellor. The event was organized by the NWO for the adoption of the Global Compact for Migration devised by the United Nations,stating, “it’s an important milestone for the international community,”adding that,“migration is a global phenomenon requiring a joint and multilateral approach.”

Now it’s the Pope’s turn to support the Global Compact, an agreement prepared under the auspices of the United Nations that establishes the guidelines for global migration management politics and strategies. The Pontiff after the Angelus, cited publicly in St. Peter’s Square his approval of the UN Global Compact for safe, ordered, and regular migration, hoping that the international community will work with responsibility, solidarity, and compassion towards those who have left their countries.

The agreement comprises of 23 objectives, developed over two years of negotiation to arrive in a joint document, where the Order of Malta is a key player in the New World Order and has contributed from the start through its diplomatic mission to the United Nations in New York.

In November, during a press conference on the Global Compact on Migration that took place in the Vatican, the Jesuits gave their endorsement through Jesuit Fr. Michael Czerny, who explained that the Vatican’s involvement aims to encourage four verbs Pope Francis has adopted with regards to migration: welcome, protect, promote, and integrate. However, the Hungarian Minister of Foreign Affairs and Trade Péter Szijjártó stressed at a press conference with the Austrian Vice-Chancellor that, “The UN Global Compact for Migration is the betrayal of Europe, because it at odds with the interests of the European people.”

Mr. Szijjártó also said during the same occasion that the Global Compact represents a serious danger to Europe because they want to use it to legalize illegal migration and portray it as a fundamental human right, and because of this, Hungary will not be adopting the Compact, as well as many other countries like Italy and the US. The Trump administration earlier this month intensified its opposition to the U.N. meeting calling it a “pro-migration”document that undermines sovereignty, warning that supporters are trying to create new international law.

Last year, Pope Francis and George Soros’ close collaborator, Louise Arbour, UN Special Representative for International Migration was appointed as special representative for International Migration, by the U.N. Secretary-General, António Guterres.  She was the one leading this high-level summit to complete negotiations on the UN Global Compact for Migration that will irremediably damage Western civilization. The United Nations along with all the countries of the NWO want to move large numbers of people from Africa, the Middle East, and Central America––to Europe, North America, and East Asia. 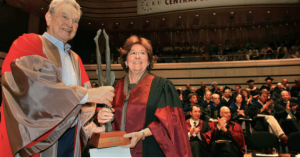 The key aspects of this destabilizing plan originally devised by Pope Francis, reveals that illegal immigration will no longer be treated as a crime: “…protect the safety, dignity and human rights and fundamental freedoms of all migrants, regardless of their migratory status, and at all times….”

“The compact is basically attempting to globalize migration governance at the expense of state sovereignty,”  the U.S. Mission to the United Nations said in a blistering three-page national statement about the Global Compact for Safe, Orderly, and Regular Migration.