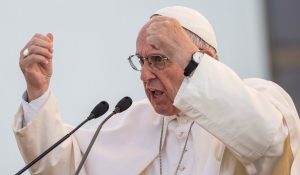 Pope Francis was publicly challenged in St. Peter’s Square yesterday, at the end of Wednesday’s general audience, by a small group of worshippers who shouted “Viganò, Viganò”.  This was a clear reference to the former Apostolic Nuncio in Washington, Monsignor Carlo Maria Viganò, who recently asked for the resignation of Pope Francis. However, the left-wing media quickly came up with a completely different interpretation of the scandalous event, stating the chorus of people were shouting:  “Italo, Italo” instead of: “Viganò, Viganò”. At the end of this article, I will include the video in question, so you can decide for yourself what was said. The “Italo” allegedly invoked by the crowd of faithful, according to the leftist media, is for a certain Italo Castellani, Bishop of Lucca, but this version of the events is not accepted by all the Italian media, as some are accusing the Vatican of a cover-up.

Meanwhile, Archbishop Carlo Maria Viganò, gave a new statement to Aldo Maria Valli, a leading journalist for the Italian National Television specializing in religious information. In this new statement, Viganò explained once again that he: “Spoke because corruption has now reached the top of the Church hierarchy,” adding that,”I made an appeal to journalists: why don’t they ask what happened to the case of documents that, we have all seen, were delivered to Castel Gandolfo by Pope Benedict to Pope Francis? Was everything in it useless? It would have been sufficient to follow my report and the report that was made to my deposition in front of the three cardinals in charge of the investigation of the Vatileaks case (Julian Herranz, Jozef Tomko and Salvatore De Giorgi) to start doing a little cleaning in the Curia”.

It’s not surprising that a mysterious case overflowing with all the sins of the Vatican clergy has apparently disappeared. In the meantime, Jill Filipovic, a journalist based in New York, and Nairobi, Kenya, wrote an article for CNN entitled: “The Pope probably should resign”in which he attacks the all-male Catholic church power structure which caused, “priests to have more alone time with young boys,”stating that, “the church’s own misogyny and homophobia compounded the shame and silence that so many abused boys carried into adulthood.”

In the middle of all this controversy, the American Catholic Church seems closer and closer to a possible schism, as liberal Pope Francis is forced to remain in office by George Soros, while Viganò’s request for his resignation increases the pressure on the US Catholic hierarchies to act before it is too late. It’s not a coincidence that most of the American bishops and organizations linked to the Catholic Church in the US do not consider themselves to be close to the Pope at the present time, but instead express solidarity with his accuser, who his demanding for his resignation.

Most of the left-wing media view Vigano’s accusations as an act of treason against Pope Francis, but the faithful of the Catholic Church are becoming increasingly fed up and want to know whether such allegations are true or not. The Vatican needs to make an official statement, instead of avoiding the whole subject.

Two days ago, an Italian news agency citing unidentified sources close to the Pope, stated that Francis is not considering resigning as leader of the Catholic Church, but the situation is getting more and more chaotic every day, and Francis might end up in a golden retirement home in Argentina sooner than planned. Supporting the accusations of Archbishop Carlo Maria Viganò are a growing number of prominent US figures of the Church. The Archbishop of Philadelphia, Charles Chaput, for example, declared his positive judgement on the work of the apostolic nuncio, “Characterized by integrity towards the Church.”Even more explicit, the Bishop of Madison, Robert Morlino, who expressed disappointment on the Pope’s decision not to respond, announced his personal esteem for Viganò, confirming that the accusations are “real and concrete”.Thomas Olmsted, Bishop of Phoenix, stated that Viganò is a trustworthy person and asks that his accusations be investigated. The Bishop of Tyler,Texas, Joseph Strickland, claims to believe the accusations credible, and incredibly enough, gives his priests the opportunity to read Viganò’s declaration in the Sunday celebrations, a rebellious behavior that sounds very close to a schismatic position.

Then we have the shocking declarations in defense of Pope Francis, coming from the Archbishop of Chicago, Cardinal Blase J. Cupich, who claims that we need to deal with global warming and migrants, instead of pedophilia of priests. “For the Holy Father, I think to get into each and every one of those aspects, in some way is inappropriate and secondly, the Pope has a bigger agenda. He’s got to get on with other things like talking about the environment and protecting migrants and carrying on the work of the Church. We’re not going to go down a rabbit hole on this.”  The cardinal that was interviewed by Chicago NBC 5 reporter Mary Ann Ahern, about the August 25th testimony  was so criticized for his words he eventually retracted his position stating: “The report created the false impression that my comment that the Pope should not ‘go down the rabbit hole’ of the allegations in the Viganò letter.”

Now the possibilities are two for Pope Francis; either he resigns, or the US Catholic Church will proclaim a schism.