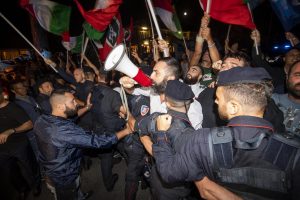 This story begins back in the middle of August, when Italian Interior Minister Matteo Salvini refused to give permission to an Italian Coast Guard ship to disembark people that were rescued under suspicious circumstances off the island of Lampedusa.  Eventually, the Coast Guard’s ship, Diciotti,carrying 177 rescued migrants, arrived off the port of Catania. Just two weeks earlier, U.S. President Donald Trumppraised Italy’s increasingly hard-line approach to immigration.

For this reason, the left-wing mondialists and the mainstream media, in the hands of George Soros, began to ferociously attack Italy’s  Interior Minister, and clashes erupted between riot police and Soros’ mercenaries who are in favor of allowing the migrants to disembark. Repeated protests from the  left attempted to pressure authorities into letting the migrants ashore,while left-wing politicians like Laura Boldrini, of the Free and Equal Party,who work for George Soros, even stated that the migrants were being held hostage as a way of blackmailing Europe.

So ten days after they were rescued, Italy’s government was forced by the left-wing extremists and the Vatican, to allow all the remaining migrants to disembark in Catania, and finally step onto Italian soil.  In the meantime, Salvini is under investigation by an Agrigento prosecutor close to the Italian Democratic Party for alleged kidnapping, illegal arrest, and abuse of office.

The day after the migrants disembarked, Pope Francis spoke about the Diciottimigrant crisis during his flight from Dublin to Rome, as well as migrant hosting in general, saying that, ”It’s better not to receive if you can’t integrate,” the pontiff then urged us to ”welcome”in a ”reasonable”way, ”integrating’‘ migrants.

Speaking about the fate of the migrants, the pope even joked with the journalist, saying he had not played an active role in the decision, but the Italian Bishops Conference (CEI) had agreed to host the majority of the migrants. He then rather oddly stated that, “The devil lends a hand, I don’t,”the Pope then added, ”They will go to Mondo Migliore, in Rocca di Papa – they will be hosted there, they will start learning the language and to be integrated migrants”.

Yesterday, one hundred migrants from the coast guard ship Diciotti, arrived, after a 10-day standoff with Italy’s government, at the Catholic Church center Mondo Migliore

in Rocca di Papa, south of Rome, with a lot of problems, and there was no sign of integration at their arrival.The migrants were met by hostile crowds and fights erupted between the right and left-wing supporters both last night and today. Even the former mayor of Lazio from the Democratic Party (PD), Pasquale Boccia, said ahead of their arrival, “It can’t be done, there is rancour on the part of the residents, which is turning into hatred, we’re already hosting enough of them”.

He then added, “Pope Francis, who has all my sympathy, does not know the situation of Mondo Migliore because he does not know that there have been between400 to 550 people staying here for more than two years in a shameful situation. This is not hospitality: we need to give hospitality with reason and in a widespread way. “

A resident of the area told a journalist, “We feel like prisoners in our homes, we are afraid, we often call the police but they do not always come, many of the homes around here have been robbed, and there is a well-founded suspicion that some of the women of the Mondo Migliore center are  prostituting themselves. ”

This, dear Pope Francis, are the words of the residents, they are not  ”integrated migrants,” but criminals that you and the left are encouraging.

Italy has threatened economic reprisals against the EU for not helping enough with migrants, but they should also threaten the Vatican with a rediscussion of the Lateran Pacts, the treaty regulating relations between the Catholic Church and the Italian state that permits this horrible state of affairs for Italy.

One thought to “Pope Francis’ migrants are welcomed with riots”