November 4th, 2017, is not only an important day for ANTIFA, and Communism at a public level, but also at an occult level, as one of the more prominent Illuminati orders, the Ordo Templi Orientis, also known with the acronym O.T.O, gather in Las Vegas on the 4th and 5th of November 2017, for what is described on their site in the following way:

“Kaaba Colloquium is dedicated to helping active O.T.O. initiates increase their leadership knowledge and skills, to discuss strategies, tactics, and advice on leadership roles and activities, and to meet with successful and prominent leaders from all over the nation. While Kaaba is aimed at current and aspiring local body officers, it is open to any member in good standing, of the I degree or above, who wishes to attend.” 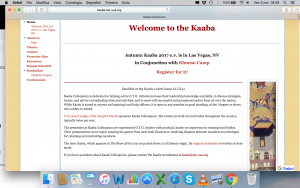 Yes, they are referring to the Holy Kaaba building, at the center of Islam’s most sacred mosque in Mecca, that features prominently in what is described by the well known Illuminati Satanic Group O.T.O. as:

in Conjunction with Khonsu Camp

@ the Sunset Station Hotel and Casino

The  American Ordo Templi Orientis, (O.T.O.) founded in 1977 calls itself Caliphate, like the infamous Islamic State in Iraq and Syria (ISIS) .

Newsweek wrote on October 17th, 2017 that: “Conspiracy theories have been swirling around the internet since the Las Vegas shooting on October 1…”

They also added an unjust criticism towards Alex Jones:

“Infowars host Alex Jones said the FBI ‘found Antifa information in the room and photos of the women in the Middle East…There was Antifa crap everywhere.’ He later speculated that the attack was organized by ‘deep state’ agents for stricter gun control laws and believed that this could lead the nation into a civil war.”

Are you really sure there is no conspiracy, dear liberals?

Of course not, because you are part of it!

In my latest book, The Decline of the Western Initiatic System and the rise of Satanism in our Society, I outline the occult link between Islam and Satanism, via the Black Magician Aleister Crowley, whose disciples are meeting in Las Vegas, for an event organized by their U.S. Grand Lodge, whose leaders are not only sustainers of the Democratic Party in the US, but as witnessed myself, are also linked internationally to the destabilizing activies of none other than George Soros, the main sponsor of ANTIFA.

I write in The Decline of the Western Initiatic System and the rise of Satanism in our society:

“It shouldn’t come as a suprise that “The Beast 666” Aleister Crowley, one of the main figures responsible for the recent decline of the Western Initiatic System, had an admiration for Islam. In Magick Without Tears, he wrote:

The most important of all of the efforts of the White School, from an exoteric point of view, is Islam

Crowley identified Mohammed, the Prophet of Islam, as a Saint of his Church, the E.G.C. (Ecclesia Gnostica Catholica), and as a Magus of his Illuminati inner circle known as the A.’.A.’., and Crowley directly compared his own relationship with the “praeterhuman intelligence” Aiwass, with Mohammed’s special relationship to the Archangel Gabriel. During the Cairo working, which resulted in the channeled reception of The Book of the Law, in 1904, Crowley was of course living in a predominantly Muslim city.”

The link between Islam and the Satanic religion of Thelema, is evident when the O.T.O writes: “The presenters at Kaaba Colloquium are experienced O.T.O. leaders with practical, hands-on experience in running local bodies. Their presentations cover topics running the gamut from local body finances to resolving disputes between members, to techniques for retaining and motivating members.”

This statement appears at the end of their public announcement: “The term Kaaba, which appears in The Book of the Law as quoted above, is of Islamic origin. Its original symbolism is worthy of close study.”

Islam and the Kaaba are worth studying for a group of liberal perverts meeting in Las Vegas, out of all places, whose motto that is present in the upper degrees is, Deus est homo (God is man).