Sunday, July 30, 2017, tragedy struck once again in Northern Europe, as a man opened fire around 04:30 (01:30 GMT) in a nightclub in Germany, killing one person. The shooting comes just after a stabbing attack from an Islamist in Hamburg left two people killed and six injured. So once again, Angela Merkel’s demented immigration policies are jeopardizing the security and health of the German people, who seem totally brainwashed by liberal media, and EU propaganda.

The gunman, who according to reports from Bild newspaper, was an Iraqi national, and was known to police, who was shot, and later died in the hospital. That was after he killed two, and seriously injured three, at the packed nightclub in the city of Konstanz – close to the Swiss border.

This scene unfortunately reminded me of an incident that happened in Germany, a few months ago, while I was DJing in a club in Berlin, as some of you may know, aside from journalism, my other passion is music, where I am known as Leo Young (https://www.discogs.com/it/artist/40508-Leo-Young).

I would like to include the following extract from my wife’s recent book, Confessions of an Illuminati Princess, to help you understand the extent of what is happening in Germany these days.

Small extract from Confessions of an Illuminati Princess, by Christy Zagami:

We made our way to the DJ booth, and were warmly greeted by the other DJ’s. I breathed a sigh of relief, as I put my heavy record bag down, and Leo prepared for his set. The room we were playing in was underground, which just added to the whole industrial effect. This is going to be an experience, I thought to myself, as I fiddled with the video camera on my phone.

An hour went by, as I filmed Leo’s first set to post on Youtube and Facebook. I wasn’t paying much attention to what was going on around me, or the man that kept trying to speak German in my ear. I continued to ignore him, but I could see that Leo noticed, and was becoming distracted and agitated. I muttered, “I don’t speak German, sorry”. He then asked “Where are you from?” I said “America,” and that is when I looked up for the first time to see that I was face to face with a Muslim man.   He was about 24 years old, shorter than me, and he was smoking a joint. I was startled at that point, as his smile faded, and his face became very dark.

“America? I spit on America.” And to my amazement, he actually spit on the floor in front of me. He then said, “You know where I am from?” “Morocco”, he proudly stated, before I could answer. At that point he pulled up the sleeve of his colorful sweater, and with his lighter, he illuminated his forearm, so I could see the tattoo of a bird with spread wings, and a red star . I had no idea what this meant, but it couldn’t be good. Sweater guy looked at me with disgust, and then he stormed off! I stood there in shock, as I watched him disappear into the red smoke of the club. Where was he going, to get bombs? I thought to myself. Oh god, why did I have to tell him I am American? How stupid can I be? My worst fears were realized in that brief moment of exchange. I started to sweat, and looked over at Leo, who was concentrating intently on his DJ set. Once he started playing, it was impossible to get his attention. I scanned the room and spotted one of the organizers out on the dance floor, and quickly went over to her, pulling her to the side so I could tell her what happened. She also noticed the guy I described, and told me he gave her the creeps. I asked what we should do? Since he didn’t threaten me in any way, there was nothing more she could do, we would have to wait and see what happened.

Fortunately for us, the outcome of this experience was positive, but unfortunately this was not the case for the poor victims of the Grey nightclub in Kostanz. 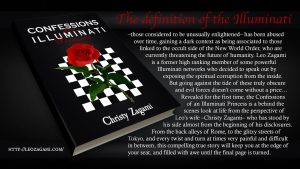 Get you copy of Confessions of an Illuminati Princess  at AMAZON: