On Sunday, the 23rd of July, Pope Francis addressed those gathered in St. Peter’s Square for the Angelus, saying, “We are all sinners”. Three days later, Pell was greeted by chaos, when he arrived to court escorted by police, who was greeted by a large group of protesters gathered before the Tribunal, calling for justice and shouting: “You’re never too old to be arrested for pedophilia!” and, “Thanks to Parliament for having believed in the survivors!”

The Vatican is putting increasing pressure on the media, by beginning a massive disinfo operation. Many have come forward from liberal circles, such as former minister and former Australian Ambassador in Italy, Amanda Vanston, who hopes that the Royal Commission on child abuse is in search of the truth, not a blood sacrifice to appease the screaming crowd. There is also Tony Abbott, former Prime Minister, and a Catholic, who described longtime friend, Cardinal Pell, as “a very good man.” 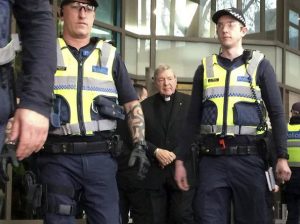 You can see Pell’s arrogance, as Media surrounded him and his legal team, to include top criminal barrister, Robert Richter QC, as he approached the court entrance today.

Cardinal Pell did not speak during the six-minute hearing.

“For the avoidance of doubt and because of the interest, might I indicate, that Cardinal Pell pleads not guilty to all charges, and will maintain his presumed innocence that he has,” Mr Richter told the court.

Pell was granted leave by the Pope, to return to Australia from the Vatican, for his day in court, but behind closed doors, he is pressuring the Australian Gorvernment to end what he believes is just waste of precious time. The pedophile mafia operating at the highest echelons of the New World Order, wants Cardinal Pell out of the spotlight, and will do whatever possible to make that happen. 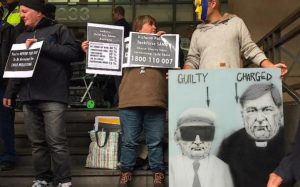 Protesters wear masks and hold placards as they await the arrival of Vatican Treasurer Cardinal George Pell at the Melbourne Magistrates Court in Australia CREDIT:REUTERS

Last year, the Australian media reported on interviews with two men, now in their 40s, who said they were touched inappropriately at Eureka swimming pool in the late 1970s, when Cardinal Pell was a senior priest in the city of Melbourne. “He would play games like throw the kids out of the water,” Lyndon Monument, a former student claimed, to the channel ABC.

“You know, his hand touching your genitals and stuff on the outside of your bathers or shorts. And then that slowly became hand down the front of the pants or your bathers or whatever you call them.”

One thought on “Judgement Day for Cardinal Pell”